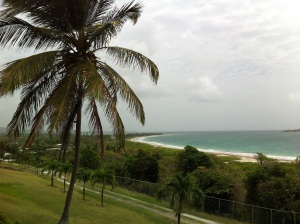 the southern coast of St. Lucia

The horses I rode in Dominica belonged to Valerie, a Canadian woman whose main stable hand was from St. Lucia. He got me in touch with his best friend there, a man named Lucius who owned 38 horses. Lucius agreed to host me and take me riding, so I took another Express des iles ferry past Martinique straight to Castries. We arrived to a staff-less immigration hall and waited for someone to arrive to start stamping our passports, in a long, hot, queue. Finally we could enter St. Lucia, one of the few independent leeward islands and the last one I would visit before returning to France.

I left the terminal to the bus station which was hardly a station, just a parking lot full of idle buses and wooden shacks covering people and the goods they sell to coin-pocketed passengers. I needed to go to the other side of the island, down south to Vieux-Fort, where Lucius was waiting to meet me at the ‘plaza.’ I pictured a latin square in the center of town, but in reality the Plaza was the commercial center of town, a small mall with a pharmacy, grocery store and KFC.

St. Lucia switched hands between the French and the British 15 or more times, and the creole language there is a perfect souvenir of this confusing colonial past. It was the first island I could not understand a word of their patois, unable to pick out any recognizable French or English word in anything people said. It didn’t help that people barely move their lips when they speak, and speak quietly, inaudibly even.  It makes me wonder when accents or dialects stop being dialects and claim their own language identity… everyone knows and speaks English too, but they have to switch it on and off according to their audience, so I believe they are two separate languages and officially, the country is bilingual.

The other unique thing about St. Lucia is their music culture. They have a strange affiliation for country music. Not local country music, but deep, Southern, American country music. All the bars and karaoke I saw there had just as many country songs playing as reggae songs. I have no idea why or how that happened.

The island was noticeably hotter than the other islands, the sun humid, the air heavy… it may have been because I was closer to the equator, but not even the Caribbean island breeze sensation could be enjoyed from the coast. The sun setting still burned my skin hanging above the horizon, and the nights brought only darkness, not coolness.

Lucius was a shy, soft-spoken man with dreads held back under nylon. He was bigger than I imagined, strong from shoeing horses and wrestling fillies. He had 38 horses but no land, so twice daily he had to find each horse, tied around various parts of town, to water them and move their grazing spot. The island was full of these homeless horses, tied around all the open spaces, and even worse, roaming with stray dogs whose horrible abuse could be seen in their scars, skinny bodies and sad, tired eyes. Lucius had a house full of equipment – western saddles, English saddles, leather bridles, synthetic bridles, bits, bareback pads, halters, combs, riding boots, horse shoes – anything and everything you could ever need for a horse. He also had 2 vicious looking pitbulls, and a row of rooster cages for his fighting cocks.

His best friend was Bobby, owner of Uptowns grocery and liquor, and quite possibly the richest man in Vieux-Fort. He drove a different car every time I saw him, mostly Lexus’ and Land Rovers, and owned more houses that I could see in the 3 days I spent there. We were at free reign to take anything we needed from his store, and what he didn’t have, he would buy for us, including every meal, drink and the pair of socks I needed to go riding.

I saw my first cock fight in Vieux-Fort, a savage, anti-climactic display of hormones and steroids battling two roosters. Each cock was beautifully kept, shiny and groomed to look as grand as possible, rubbed with alcohol and pumped with drugs to make them vicious and resistant. They fight to the death, which doesn’t always happen, but when it does, its from a broken neck the other inflicts on him by the spurs worn on his legs. People, mostly men, come and watch, cheering on the stronger cock, betting thousands of EC dollars on each fight. I came, watched, slightly horrified, and almost forgot to continue breathing when one cock finally dropped dead right infront of my feet.

I returned to my element when I got my hands on some horses, and was given the distinct honour (or condemnation, Im not sure) of riding the wildest stallion Lucius owned. Silver Treasure, a 5 year old dapple-grey Arabian, had never been under saddle, and only ridden a few times over a year ago. I saddled him, mounted him, held on for more than an 8 second bucking rodeo, and then paced him for half an hour while planes landed overhead. We were metres away from the International airport, and though he was used to the deafening sound of low-flying aircraft, it was a perfect excuse for him to remain restless. He finally calmed, and we established a peaceful relationship, friendship even, as we took a 3 hour trail ride through mangroves and beach along the Atlantic coast with 5 other riders, 2 with stallions. He had some of the most beautiful gaits I’ve ever ridden, and was the type of horse who would run to his death before tiring. His fiery attitude was fatally attractive, and I admit wholly to falling in love with that beast of an animal.

I met some med students there (surprise surprise) and was invited for dinner by a group of American guys. Visar was ‘my host’ and bent over backwards to make me as comfortable (and drunk) as possible. We went to a beach bar full of other American doctor’s-to-be, and I met one professor who could tango. I was wearing flip flops, and searched through the crowd of people with my head down to find a woman with size 38 heels I could borrow. I finally found a pair, and after some more time, convinced the dj to play a tango song, but by this time, was well too liquored to do anything beautiful with my legs, despite his perfect lead. So instead, I retired home early, and spent the Sunday recovering a bad headache and dreading my ferry ride to Martinique.