Since Friday, I’ve been moving around south, west and east Iceland, and everywhere I’ve gone, I’ve found sun… 24 hrs of sun. And warmth. Its like seeing heaven fall down on a place you’ve grown to accept is always cold and dark, since every passing winter makes you forget what summer is like. Summer in Iceland also has a smell, the smell of people barbequeing meat and grilling hot dogs in green backyards and sunny patios. The sound of summer is the roaring lawn mower, with the smell of freshly cut grass always lingering around town. 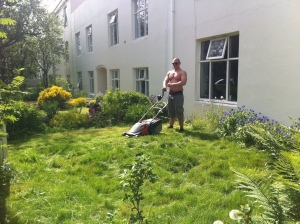 The midnight sun also gives a special kind of light, a more dramatic sunshine that never makes it feel like high noon, but that the sun is always on its way up. When you realize it is actually on its way down, it takes forever for shade to spill into open spaces, and eventually, just when you think it might get dark, the sun is already rising again, and you’re never really sure when the sunset turned into another sunrise.

People have superstitions for full moons and Friday the 13ths, but midsummer night in Iceland is probably the most magical, mystical night, since there really is no night. There are more people on Laugavegur at 5 am than at 5 pm, and the skantily clad partiers bare their sunkissed skin without a single goosebump. Downtown Reykjavik over midnight summer weekend is probably the only place you can get away with wearing your sunglasses at night. The midnight sun still peeks behind the low horizons, and the skies around the blazing sun turn into pale hues of pink and orange. If the temperature drops enough, a low cloud of fog sits on the dewy grass, and you can actually taste and see the air cooling as steam rises from the day-warmed lakes.

Last night I went riding with 5 others until midnight, and the dust from 80 horses in the free-running herd between us couldn’t rise above the midnight fog. The sun had just dropped behind the mountain rise above the valley, but the mountains behind us, still covered in snow, reflected the pink sunset/sunrise we couldn’t quite see anymore. After returning the horses to their field and driving home around 1:15, the subtle darkness started to lift and the pink skies had now moved around the horizon as the ever-circling sun started rising again. If only midsummer nights could last longer than a weekend…

The Cypriots claim all the best parts of Greek culture, like their raki, gyros, and Mediterranean beaches, but still have a unique Cypriot identity, with a splash of random foreign influences. They drive on the left side of the rode and use British power plugs, and the highest number of tourists come annually from Russia. My couchsurf host was a perfectly sculpted Cypriot, who ate only salad at night, and had a white shitzu terrier. She wore a pink bow on her head and always greeted your arrival by running up the stairs to eye level and offering her paw out to shake hello. I spent little time there, but instead saw the inside walls of a classroom for most of my time in Cyprus (which were very pretty walls, I must add). 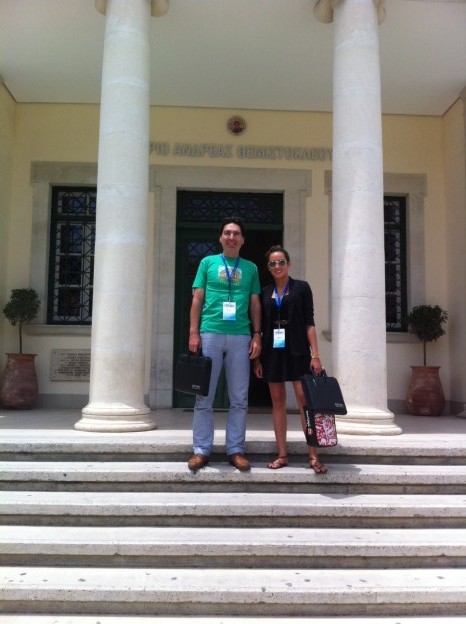 me and Theo at TEPAK

ICOT is the annual International Conference on Tourism that I decided to attend last minute since I missed all things Greek. Cyprus isn’t quite Greece, but an independent tri-state country (the British, Turkish and Greek have unofficially split up the country) that I could also add to my country list. And, who am I kidding to not say I mostly wanted sun and 30`C. I also got to present my paper on ecotourism, which had a surprisingly large turnout, which was either thanks to my supervisor Dr. Nelson Graburn, or due to the fact that I was listed as a speaker from the University of Iceland in Israel. There was some confusion when the country code “IS” was expanded to Israel by the conference organizers, and people must have been curious to hear from a student at the unheard Icelandic university of Israel.

The conference included about 100 papers being presented over 2 days, minus a few no-shows, including the guy who won best paper (that award ceremony was a bit awkward). It was full of interesting characters, including the hunchback of Notre dame and a vivacious Brazilian woman who made an imovie presentation about the bikinis and beautiful people of Brazil for her talk. There was also a resident dog at the Cyprus University of Technology, who befriended everyone as if he had already known them for years.

Ironically enough, the largest problems we had were technical, with mics, computers and the internet not cooperating as they should, especially considering the fact that we were hosted by a technological institute. Other issues were the same things that come up at every international conference; the native English speakers spoke too fast, the non-native speakers of English couldn’t understand the accents of other non-native speakers, the South African’s always kind of sounded like they were speaking Afrikaans, and the North Americans couldn’t understand anyone except for other North Americans. This resulted in a lot of English to English translations and a few total misunderstandings lost in translation.

The clash of international cultures was more apparent, with different levels of classroom manners pushing the tolerance of each and every speaker. There were those who found it acceptable to talk amongst eachother, walk in and out of the middle of presentations, and the Cypriot photographers who were always switching lights and shutting doors in order to get the best photo of the nerve-wracked speaker. The Greek speakers were always the loudest, since they couldn’t whisper or exercise their inside voices. They even managed to walk louder than everyone else, their footsteps in the hallway heard from every classroom. But, their warm, friendliness never allowed you to lose your patience with them… so you just had to carry on and talk over them.

There were also those speakers whose last names you knew from referencing in your own work, and putting a face to those papers was always a pleasant surprise. The free time between lectures included lunch and coffee breaks, where all the presenters mingled among themselves. The superficial conversations always went the same, “Where are you from? What do you study?” Once you got past that, you were sized up as worthy of more conversation or not, and each and every academic had this natural inclination to compete with eachother in confidence and knowledge of what they do. The presentations were all strictly limited to 15 minutes, so it was always a race against time to show and prove as much as you could during your talk.

The conference had its funny quirks, but in the end, an international conference like this is always the perfect chance for academics to meet and mingle with people from all over the world, inspiring eachother to think about tourism in other ways and other places. But, despite our different backgrounds and various histories, it was wonderful to see how much we all had in common in the end, sharing our interests in tourism while being tourists ourselves in Cyprus.

The Crystal Symphony is only one of 2 cruise ships that Crystal Cruises owns, and at 6 stars, its supposed to be the most luxurious cruising experience available today. Everyone that sails for 7 or more days on one cruise automatically becomes part of the ‘Crystal Society,’ but there are milestone levels (5, 25, 100, etc) which entitle you to certain privileges and free cruises. Even though the company has only been sailing since 1988, there are guests who have sailed on over 200 voyages. On our voyage, there was a 98 year old woman who had been on some 98 cruises, and another woman who had been on 189 cruises. There was a couple who had boarded the ship the cruise before, and were going to stay on for 5 trips in a row. There was another woman who had moved into one of the penthouse suites, and was going to be a permanent resident of the ship for an entire year.

the Crystal Symphony in port

Naturally, the level of class and wealth was more than a stones throw away from what I normally pass for, so I had to answer a few funny questions and explain what I was doing there and why I didn’t look Icelandic. Most conversations started with who’s who and from where, but some were quite secretive. My favourite answer from a German gentleman was “I’m super famous but you’ve never heard of me.” Others belittled themselves, “Oh it doesnt matter, I was just invited to come here so I did but I really shouldn’t be” and others tried their best to look and act as important as possible, though noone ever really figured out their story.

The cruise is all inclusive, and employs around 450 staff and has a guest capacity of some 950, so the employee to passenger ratio is nearly 1-2. On our particular cruise, a 12 day trans-Atlantic from New York to Reykjavik, the ship was only half full, so we enjoyed a 1-1 staff to guest ration, easily making the voyage one of the most hospitable, comfortable ways you could imagine a cruise ship to be. 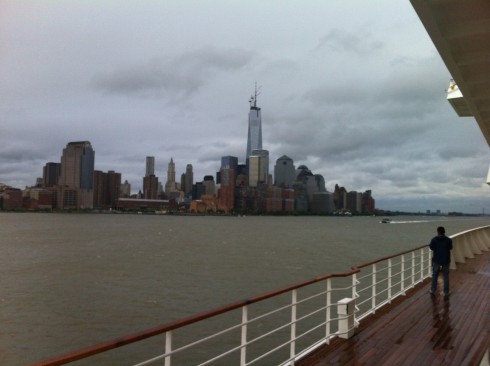 There were only 4 Icelanders on board, two tourism professionals, a guest chef, and a geologist who was our volcano specialist and destination lecturer. We were constantly stopped and asked a thousand questions about Iceland, the most common being about the Blue Lagoon, and everything else as random as ‘can I buy protein shakes in Reykjavik?’ People wanted lists of what to do and what to see, and recommendations where to eat and party. The guest chef, ‘Icelandic Food Expert’ Thrainn from Kolabrautin, was asked for photos as if he was a famous celebrity, but he became quite favourable with the staff when he kept giving out samples of Icelandic food and drink and insisted on helping in the kitchen even though he was only supposed to show up and teach others how to prepare his food.

After the final crossing, from New Foundland to Iceland, even the cozy comforts and all inclusive luxury wasn’t enough to keep me from getting cabin feverish. The ship got smaller and smaller and by the end of it, you couldn’t turn a corner without running into somebody you knew, but somehow, I left with new friends I would have never though I’d make, who probably think more of me as a pseudo-daughter than a friend, but nevertheless, I’ll be sure to visit them soon…