Clare wanted to show us one of her main anthropological research sites, Ketchikau, a rural village she spent a lot of time in. The journey down was over an ill kept dirt road, and the village itself is one of 5 small villages along this road bordering the western side of Chobe National Park. It was a quiet, spread out village with only 1100 people living there, and the only other non-indigenous person in town was a Californian named Tory stationed there as a Peace Corps representative. People rely on agriculture, livestock, fishing and other informal types of employment for a living. There was a mix of brick & concrete houses, mud huts, and tents that people lived in, one elementary school , and the most ridiculous, unnecessary police station that looked like a massive, high profile, Naval base. As far as I understood, there was barely any crime, so I have no idea who actually works as a policeman or what role they have in the community. Tori, the current Peace Corpse volunteer has two projects going on in the village, one supporting the village high school girls soccer team and the other setting up a support group for orphans who have lost their families due to HIV/AIDS. Its definitely a worthwhile cause and her efforts could benefit from more support (see link below).

We left Ketchikau the next day to head for Chobe National Park. It is completely unfenced, allowing the free movement and migration of wildlife both around Botswana and in and out of Botswana. The country statistically has more elephants than any other country, but its hard to pinpoint exactly how many migratory elephants there are, and whether or not they belong to neighbouring countries. Eitherway, there’s a lot of elephants, and when we camped overnight at Savuti, one of the camps within the national bark boundary, our campsite came complete with a big, male elephant trying to shake the tree shading our site for fruits. We just had to patiently wait until he was satisfied, watching from the car about a hundred metres back, before we could enter our camp site again.

There aren’t even fences around the camps, which is an interesting thing to deal with if you have any fear of free-roaming lions or elephants stepping on your tent (its gotta have happened to somebody). National parks in the rest of southern Africa are often much more heavily managed, with human safety and comforts taking priority over undisturbed wilderness, so it was refreshing to stay in a national park that had such minimal infrastructure, almost no facilities or buildings except for the toilet and Park Ranger’s hut. I only saw a handful of staff members the three days we spent in the park, most of them controlling park and campground entrances. This sort of minimal management made our Chobe experience much more intimate, and our self-drive game drives through really narrow, 2 track roads in deep sand passable only by 4 wheel drives always kept things exciting since getting stuck probably meant we were stuck for a while; cell phone reception was sparatic, and unless you were on a main road where another car would pass, no park staff checked the roads or enforced the ‘no driving after sunset’ rule. 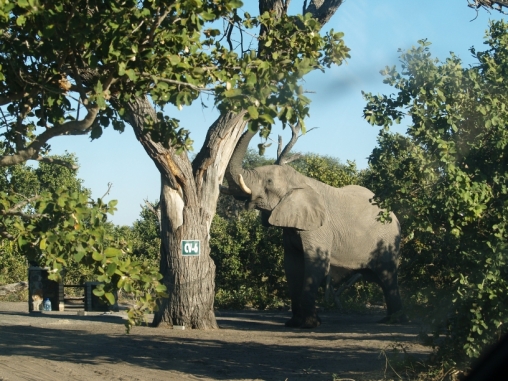 our elephant friend who just wanted to eat at our campsite

We actually had one car problem arise, but luckily enough it was only 2 km out of Ketchikau on the first morning we set out, and cell phone reception was still strong enough for Clare to call a mechanic friend of hers to come rescue us. We sat and waited for almost an hour even though he kept texting that he was on his way and coming ‘now-now-now’ (quicker than now or soon), and when he told us he had already driven 3 km out to try and find us, we were super confused since this sand track road is completely impassable without him driving over our stalled car (there was thick brush on both sides). Kubublanco had just overheated so after a little more waiting we thought itd be ok to drive it back to town and wait for him there. Thirty more minutes passed before he told us he was stuck on the same sand road… but we had just driven it and we certainly didn’t drive over him so got super confused. We had no choice but to believe him so drove back out the same road, and lo and behold, there he was, stuck in the deep sand about 500m ahead of where we had just been waiting. Just to qualify we weren’t totally crazy, the mechanic explained there was another road that joined the one we were on so after saving his car, he spent some time inspecting ours and gave the thumbs up.

There were also fewer tourists and tour operators in Chobe than I expected, but it probably had something to do with the difficult, single car roads. What you did see a lot of, without fail, were South African tourists, and they were identifiable from miles away since they always traveled in excessive luxury: a caravan of maybe 5 vehicles, each carrying only 2 people, dragging a tent-top trailer, and bringing in all their own food, water and supplies they needed for the week from home. Their camp sites were set up with tent awnings, or sometimes a shade tarp with carpet laid, and the men all wore tight, blue jean, short shorts and high socks that showed off their thick, muscly thighs just a bit too much. 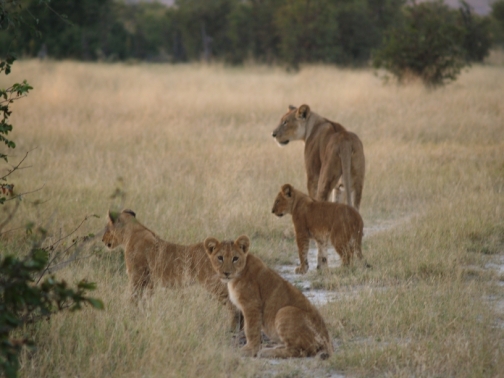 The park fee was reasonably cheap, at about $15US, but camping was very expensive at about $45US per person, per night. That’s probably another deterrent, in addition to the fact there are only a handful of campsites available that have to be booked months in advance during peak season. However, it makes sense to have these obstacles since it keeps demand down and individual tourist experiences more intimate. We had a great time, enjoying water holes with drinking elephants to our selves, a herd of giraffe only 50 m away, hundreds of impala in the middle of big clearings, and the highlight probably being a group of lionesses and lion cubs strolling right past our car at dawn.

Links: If you are interested in making a donation, please feel free to contact Tori (masontori@gmail.com) or you can contribute directly to this project by doing the following: The easiest way to donate is visit www.peacecorps.gov/donate and search by the project number, 637-082.