Our last day in Namibia was spent at Chameleon Backpackers in Windhoek, which is actually a really cozy, reasonably priced, upscale hostel, but is surprisingly paranoid about safety. They post these outrageous signs like “The Windhoek experience: take your bags into town and get robbed in broad daylight” and “Carry your valuables with you and you will get mugged.” They make you hire their privately chosen taxis for any inner-city transport, and frown on you if you even dare think about waving one off the streets. Its strange that instilling fear in tourists is somehow seen as a good way to promote tourism…

We ate at Joe’s Beerhouse, popular with many, and I tried Ostrich, Zebra and crocodile meat for the first time. It was Steve’s birthday and everyones last night together so it was a bittersweet evening, but knowing that I was on my way home was also a comforting feeling.

Going home I flew through Johannesburg and spent a night there with Dana’s family, but we basically just ate, showered and slept before I went straight back to the airport on the new Gau train – which is actually not pronounced anything like its spelled and I had a hard time getting my taxi driver to the right station at 4 am when I surely had no idea where I was. Once I checked in and got to my gate, I watched my last African sunrise come over the tarmac with jumbo planes taking off and landing that seemed more majestic than usual. 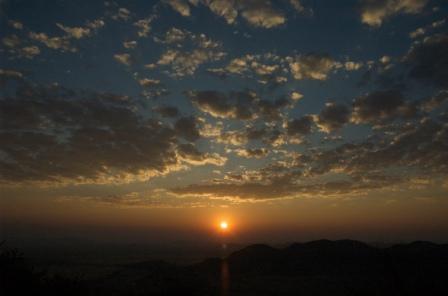 what I’ll miss most – african dusk and dawn

I was actually really looking forward to my trip home since the British Airways flight I took was direct from Johannesburg to London in 10 hrs and the plane was virtually empty so I got 3 seats together to just lie down and sleep the whole way. I couldn’t really sleep so I watched 4 movies and ate all the food and drink I could to make the flight more enjoyable. I barely had enough time to get off that flight, get my baggage, move from terminal 5 to 1, and then check in for my next flight in 4 hrs, and then had 2.5 hrs on a super full flight with absolutely no food or drink. It took the whole day to get back to Reykjavik and my cousin picked me up just before midnight and it was nice to see it was still twilight. I missed the long days, what a relief to not expect sunset at 5:30pm anymore. Although its hard to swap the brightness for the warmth, since 13 degrees isnt exactly my idea of warm sun.

The water is probably the most welcoming thing I’ve experienced so far in Iceland, since there is no shortage of it and we’re no longer camping in the bush having to fetch enough water for 5 people for 4 days. The cold water comes out of the tap cold, tastes great, and even the sulphury smell of the hot water beats the smell of kalky water in Namibia.

It was wierd to deal with traffic and other cars and so many people in Reykjavik, but I had a hot dog from Baejarins Bestu and packed my things to go the next day to Vestmannaeyjar, home of my dads family and also the biggest party in Iceland every year – Thjodhatid.