When one thinks of Dohop, they think of a super-useful tool for searching for cheap flights online. However, behind this triple-dub website is actually 8 guys in an office on Nóatún who play some serious foosball every lunch hour. They´re all Icelandic, they bike to work everyday, most of them have computer science or engineering backgrounds, and each person has 2 or 3 computer screens at their desk where they do all that fancy shmancy high-tech work. I spent some time at the office getting getting to know the guys and came up with some Q & A´s for all you dohop users to get to know the faces behind the scenes.

Has lived in: Norway

Dream Vacation: Somewhere in the Himalayas    Why? To do some mountaineering

Kristján has been with the company since it started, and explained that when picking the Dohop office location, a bike parking area was one of their top criteria. A typical day managing the guys in the office goes something like this: they start with a meeting every morning, then he reviews yesterdays performance in traffic and income, then spends a couple hours on email, and the rest of the day just helps the guys do what they have to do, walking around only in his socks. He thought longest about where he would go if he could go anywhere tomorrow, but decided on the Himalayas since mountaineering is his second love after Dohop; on the weekends he works with Mountaineers of Iceland to lead extreme adventure tours and epic hikes in the hinterland of Iceland.

Thorir with his dohop mug

Has lived in: Norway, Denmark

Dream Vacation: NYC   Why? Because its one of those really exciting cities

Thorir, like others, really doesn’t know what his exact job title is, but his job description is basically to keep the computers up and running, and the systems working so that the website is always on line. He works closely with the vendors and deals with website problems like incorrect or missing price quotes by the airlines/search engines Dohop works with. In his spare time, he runs lots of marathons in places like Boston and Berlin, and even ULTRAmarathons in Iceland (they must be really hard).

Siggi takes such great portraits because he sometimes models

Has lived in: Vienna, Copenhagen

Dream Vacation: Australia or New Zealand   Why? Because he´s always wanted to go and hasn’t gotten around to it yet

Siggi creates and maintains connections with airlines and online travel agencies. He spends his time at work looking up fares and finding new ones, and getting contracts with them to code it into the Dohop search engine. He also fixes errors, changes things (vague, but nevertheless important), and makes links. Most notable mention goes to Siggi for the best photo.

Atli is working so fast that his hand always photographs blurry

Born: in Minneapolis, Minnesota  (*see my last blog post for more on the cosy midwest)

Dream Vacation: Innsbruck or Zurich, somewhere near the Alps   Why? Skier. Say no more.

Atli helped found Dohop back in the first century of the second millennium, and also calls himself the head of development and does some complicated programming stuff. He basically takes care of Garðar and Arni, which could mean many things, but it doesn’t mean he babysits. He´s important… as are all chief technology officers.

Arni, nice and tanned after Africa

Has lived in: Providence, RI

Dream Vacation: Brazil    Why? He´s heard good things. Wonder who is sources are… haha just kidding, it is a great place!

Arni says his job requires a lot of chaotic screen shots, where he spends his time writing for the server, all the behind the scenes stuff. Something about caches and other computer engineering jargon about software. Let´s just agree he´s very smart. And, he says Atli is the best boss he´s every had, so he´s also nice. And, he just got back from a 3 week holiday in Africa, finishing a Mount Kilimanjaro summit in 6.5 days (4 days up, a day and a half down). Not everyone can say they´ve ticked that off their bucket list.

Garðar, the other Software Engineer

Has lived in: Boston

Dream Vacation: New Zealand    Why? Because its far, far away and looks like a cool place (It is a cool place!)

Garðar disagreed about Atli, saying he´s a terrible boss, but somehow I sensed sarcasm in the comment and thus, feel its ok to share that he said that. Garðar has been working for a few months on a totally new software program called Sherpa, which will be a completely new system for corporate clients to find, schedule and book travel for their employees. Its in the testing phase now, but he´s single-handedly (with the help of his terrible boss) written all the code for the program, so he must be really, really computer smart.

Has lived in: Iowa. How central!

Dream Vacation: Seychelles    Why? Because he needs some good fun in the sun, and once in his life wants to go on an extremely luxurious vacation

David is kind of my boss at work, since he´s my go to for all my pestering emails when something’s not right with my blog. His real job is to sell Dohop’s products to airlines and similar companies, and try to increase traffic to the site with clever marketing strategies. He´s a super human too, since he just celebrated Christmas, New Years, a newborn and his wedding while still staying fulltime at Dohop, bikes almost 8km to work every day – the furthest of all the guys – and is the only employee to regularly cook lunch for everyone once a week. 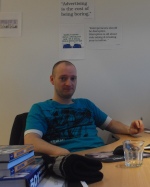 This is what a giraffe trainer looks like, just in case you didn´t know

Born: in Keflavik (not the airport, the town. Yes, there´s a town there)

Has lived in: Israel, Croatia

Dream Vacation: Marakesh   Why? Because they like blue, and he likes the food

When I asked for his job title, he first said Marketing & Hairstyling, then Marketing & Muffins, but then decided on Marketing & Giraffe training when Director of Marketing didn’t sound accurate enough. Yes, Jóhann may be the strangest of all the guys, but it might just be because of where he was born. His job is to try and get more visitors to the site, through twitter cleverness, Facebook friendliness and schmoozing journalists. He advertises press releases, keeps up on all Dohops social networking, and maintains the voice of dohop’s other blog, blog.dohop.com.

And there you have it, the Dohop name and website trafficking hundreds of thousands of visitors just boils down to 8 guys in an office somewhere in Reykjavik. Its worth noticing that all the Dohop guys have had their own international experiences, so the computer intelligence behind the website doesn’t just come from their science genius, but also their own appreciation for travel. I vote Dohop number one for online travel booking not just because the website always has the cheapest flights, but because the people behind the company also kick butt at making budget travel possible. Oh, and also because they have a Giraffe trainer as their social media networker.

Follow dohop’s tweets @dohop, and use www.dohop.com for all your flight, hotel and car booking needs!