Arriving from Vancouver and Vegas to Grand Cayman made it feel like I was flying to a tiny, barely inhabited island, in the middle of nowhere. After a week there, its busyness surprised me, but I started to see the same people, recognize  all the main streets, and finished visiting every where there was to visit (some places, more than once). This made it seem smaller and smaller as time passed.

Then I flew to Little Cayman Island, which really is a tiny, barely inhabited island in the middle of nowhere, and it couldn’t really get much smaller  with time. 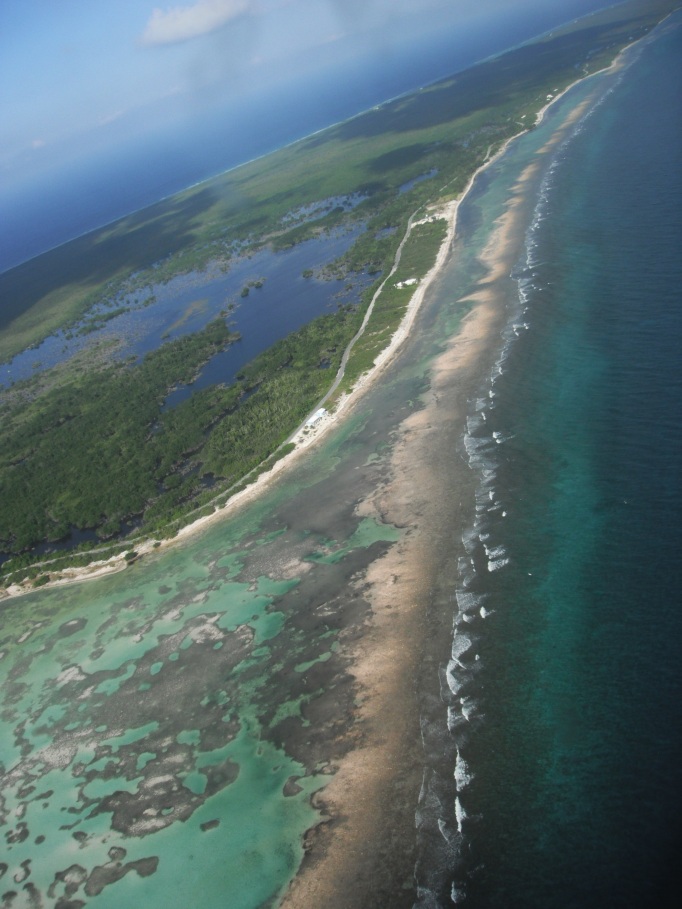 Little Cayman from the air

It has a resident population of 120 people, its about 12 miles long and one mile wide, and only 90 miles from Cuba. To get there, one takes a 35 minute flight in a 12 seater plane, with the luggage stowed away behind the last row of seats. Though there were only 9 passengers traveling, they still managed to forget one of my bags, which was a waterproof dive bag and carried my books and a volleyball called Wilson – three very important things when on a remote Caribbean island (ever seen Castaway?).

Out of the 120 residents, few are Caymanian, and the island blends a mix of ex-pats who refuse to live in colder climates. They host and run an expensive tourism industry, fueled by scuba diving, snorkeling, and most recently, kite surfing. Visitors stay at one of the resorts, enjoying hobie cats, kayaks and hammocks, and add a fluctuating 80 more to the population number. 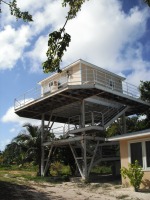 Resorting isn’t really in my price range, and the only 2 couchsurfers on the island couldn’t host, but one dive master tipped me off on a fun fact – the bartender at Little Cayman Resort was Icelandic. I asked some questions, found him on facebook, had a mutual friend, and three days later, arrived in his skyloft to crash with Marieke, my host from Grand Cayman.

He was an excellent host, taking us on many adventures. The first was a kayak expedition to abandoned Owen Island, against fierce winds and white water waves. We walked the last 200m after capsizing, but made it back down wind in no time. 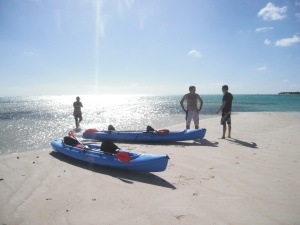 snorkeled. We played dodgeball. We biked to the end of the island. We tried to kitesurf, but failed when the wind calmed. I tried fire dancing.

Our biggest advneture was a 2 am mission to Owen Island on his friends boat, which we grounded twice in the shallow water. Or it may have been the excess wait in the boat (we were 8 in 5 seats). Or it may have been the pitch darkness, although there was an eerie glow from the full moon which made everything seem like a Pirates of the Caribbean scene. We tried (and failed) to light a bonfire of wet palms and bamboo, and almost used all our spare gas trying, but managed to avoid getting stranded.

Ingvar was working most days we were there, but it made no difference since we ended up at his bar every evening anyway to hang out. This was also where we had most of our meals, and met half of the Island since people came thru all day long. Some were iguana-walk tour guides, others were kitesurfers, the dodgeball guy and his dog, and even the airport arrivals guy who was better known as ‘ninja’ (he was an incredible fire dancer).

fire dancing by the failing bonfire

When we had to leave the island, we simply walked to the concrete strip of road they cal their ‘airport.’ Noone was there til 20 minutes before our flight departure, and he just showed up with our boarding cards and luggage tags and handed them out to us standing around. He knew who was who, didn’t care what we had packed, checked no ID and didn’t even have a security check for us to go through. It seemed too quick and easy (if only all air travel was that laid back), but, magically, they lost my bags again, somewhere between Little Cayman and Grand in that 45 minute window, on that tiny plane…

I stood in Georgetown trying to make my connecting flight to New York, and when they told me my bags would have to arrive a day later, I begged not to be sent to New York without them. I was wearing flipflops, shorts and a shirt, and had nothing else until getting back home to Iceland, where it was -15 degrees and snowing. They agreed that was tough, so delayed my flight by one day, upgraded me to business class, and let me have one last night in Grand Cayman. I could certainly think of worse places to be stuck…

One thought on “Little Cayman”