Amsterdam was totally frozen over when I arrived there from the Irelands. The canals were frozen solid, for the first time in over a decade, and people were traveling by circles around the city center instead of weaving thru the zigzagging streets. The weather was +9`C a few days before so I only packed a light rain jacket, but I had to scour the street market in De Pijp for another sweater and some long-johns to layer up against the cold.

I couchsurfed with a few different hosts the week I was there. The first was a big Dutch guy with curly long blond hair, then a Persian immigrant living in an ‘anti-squat,’ and finally an Indonesian-dutch Phd student. I also spent some time with a Greek guy born and raised in the Netherlands who knew a few squat locations for great eating, drinking and ping pong. I haven’t

My vegan meal at MKZ

quite figured out the logistics of squats and anti-squats, but they both create really interesting, atypical spaces to commune. The Persian guy lived in an abandoned office building with 5 other roomates who each lived in an office room, while the other 30 offices just stayed eerily empty. The squated spaces were a combination or restaurants and bars, one in an old film school campus where people screen movies and train in acrobatics. People from all walks of life and different fringes of society get together for ping pong tournaments with 30 players on one table and 3 course vegan meals for 5 euros. I wasn’t any good at ping pong and didnt bring my own paddle anyway, but the vegan meal was delicious and paired well with a 1 euro organic beer.

I spent my days trying to sight-see but could only bear the cold for a couple hours at a time, so broke up my walks outside with stops to the Van Gogh museum and visiting various cafes. I met 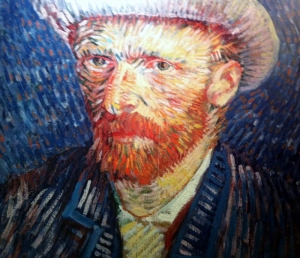 a friend for lunch in the Surinamese neighbourhood and accidentally ended up eating Cuban food, and I stumbled upon the redlight district when I got lost trying to find central station.

Besides getting lost a couple times and making a few mistakes with packing (plus a few I made during the trip that I haven’t admitted to), the trip was slightly overshadowed by my upcoming phd interview so I used it as an excuse to sit still and stay inside. I couldn’t capitalize on the rare winter weather since I didnt have any iceskates, and was a little tired of the cold after a 6 week snow storm in Iceland, so I’ve decided I just have to go back to Amsterdam in the spring to really scratch under the surface of the  charming, slightly infamous city.