The island is called Sint Maarten on one side, and St. Martín on the other, since this island is split between the Dutch and the French. There’s no official border between the two, just a road sign welcoming you to the ‘partie Francaise,’ and the French side is a little more than half the island since the French guy cheated . Apparently, a Dutch guy and a French guy met at one point on the coast of the island, and agreed to walk away from eachother along the coast until they met again half way around. The French guy started walking north, bought a lot of wine, and then cut straight across the middle of the island to meet the Dutch guy still walking along the shore. Thus, the boundary was drawn in favour of the French.

The island really feels like 2 completely different places. The French side actually speaks French, while the Dutch side is full of massive hotels and resorts and I didn’t hear a word of Dutch spoken. Both sides speak English, and accept the dollar, but the Dutch side uses another currency called the Guilder, and the French side uses Euros but accepts the dollar at par. The French cars have EU license plates, and the Dutch side have Sint Maarten license plates. They have separate healthcare systems and education programs, and the French bike and play soccer while the Dutch prefer baseball, basketball and cricket.

Arriving in St. Martin after the tiny virgin islands was like landing in a European Vegas in the middle of the Caribbean. The airport was as big as a shopping mall and cleaner than a hospital, and the road to town was lit up with restaurants, bars, casinos, and hundreds of boat masts. It was a Friday night, the second day of the Heineken Regatta, and the island was bustling like a mini sincity.

We followed the Regatta Events and the hundreds of beautiful boats racing, first at Phillipsburgs boardwalk, then in Marigot where we met some Russians to dance and drink vodka with. One of them didn’t speak a word of English, so we used google translate on my iphone to communicate. I met the one and only Dutch person on the whole Island that night too, and for whatever reason he assumed I was dutch when I asked him for a table for two in English. All the other people I spoke English to thought I was American, and the French people I spoke to in French thought I was Spanish. Noone ever guessed Icelandic, of course.

I spent a few days beaching, first in Orient Beach, an infamous nudist beach where old, French men like to parade around their jewels, and then at Baie Rouge, where wearing a thong bottom got me a free massage on the beach. Me and Matt stayed a couple nights in Simpson Bay on the dutch side, where the old American tourists where a bit more tame.

I enjoyed the Frenchness of the French side – the delicious bakeries, baguettes, wine, and even creperies. I made the mistake of buying a chocolate crepe from a food stand thinking I would get something equally delicious as in Paris, but instead got a pre-cooked, thin pancake, heated up on a pan, drizzled in Hershey’s chocloate sauce, and folded 3 ways to make an inedible catastrophe. 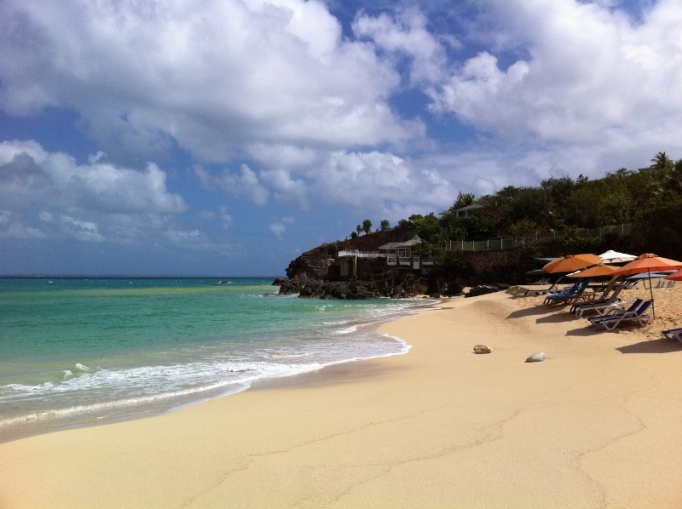 I couchsurfed the French side, in Anse Marcel on the north side of the island, which is a small residencial complex only steps away from the Radisson Blu Resort. I had access to 3 different pools, a beautiful beach, and a jack Russell terrier named Poissette to keep me company since Yoann, my host, was working all day every day. He had the evenings off to show me a few cool places, like Lolo’s BBQ restaurant – the best local food in St. Martín, the Shore Nightclub -what I’ve always pictured Ibiza to be like, and Sunset Bar – a famous beach bar on a thin strip of sand between the ocean and the airport runway where planes fly so low you almost get blown away!