I booked a regrettable 7:30 am flight to Guadeloupe which had me leaving Julia’s stable at 5am. A few hours later, I had arrived in France. My Icelandic passport got me waved through immigration as if I was back in the EU, but I requested a stamp from the Police station in the arrivals hall which said “Guadeloupe,” not France. It was St. Patricks day, which apparently everyone in the Caribbean cares about despite there not being any Irish on the islands, so my host Francois had planned an exciting holiday excursion.

We were to tour all of Grande-terre, one of the two islands comprising Guadeloupe’s butterfly shape. We started in the capital, Pointe-a-Pitre, at a lively fish market. Nearby were stalls of fruits and vegetables, spices and hotsauces, pin-cushion dolls and home made rum. We tickled our noses through rows of smelly things, and bought some carambola, sting ray, habanero peppers and parsley.

Next we drove along the south coast, stopping in Le Gosier for a view of Ilet du Gosier, a tiny island off the coast. We carried on to the Club Med beach, where dozens of palm trees shaded the sandy beach and all the half nude frenchies lazing around. We bought tiny cups of juice for 3 euros each, and once again realized I was no longer in the cheap Caribbean but instead on a European island disguised by sandy beaches and warm weather.

We arrived on the windy Atlantic side in Point des Chateaux, a narrow peninsula ending in the eastern most part of the island. Here herds of tourists took pictures of La Desirade, another nearby island, and ate hand-made coconut sorbet from a woman with a rusty churner. We finished the circumnavigation after reaching Pointe de la Vigie, the cliffy northern boundary of the island, and driving through Port Louis and Petite-Canal. Then we cut back east to La Moule, where friends’ of Francois had invited us for a bbq and some beachvolleyball. 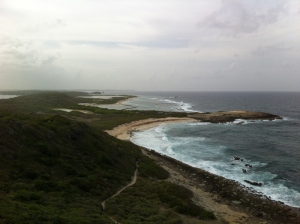 We played games in various teams, 4 on 4, 6 on 6, girls versus guys, and male only teams.  We could never keep track of the score, and played to 15 or 25, depending on what we felt like. The bbq was potluck style, everyone bringing something different to share. We grilled our stingray in peppers, parsley and beer, and cooked some other fish that ended up tasting slightly better. After filling 3 garbage bags of paper plate, plastic cups, and empty bottles, we went sandy-faced to Maho pub, a grungy, hippy-esque shack with the strangest assortment of locals.

I saw a black, 60 year old, toothless prostitute, blonde guy in Aladdin pants and embroidered vest, a beautiful young woman in a flowy, white satin dress, and the two brothers I had met in Antigua through couchsurfing. They were supposed to be in Dominica, but had changed their minds to spend the weekend in Guadaloupe, and of all places to be at that moment, were also at Maho.

We afterpartied at the Marina, and I crashed hard after 23 waking hours in Francois’ bed,  since he’s that stubborn kind of couchsurf host who insists visiting strangers get to sleep in his bed while he surfs his own couch. The next day, we went the whole way around Basse-terre, the bigger but wilder half of Gwada’s butterfly. We stopped at one national park to see the Chutes du Carbet, hiking to the first of three waterfalls. A little further down the road, we hiked along an unmarked trail to a hot river, flowing down between large rocks and forming bathing pools of decreasing temperature. We soaked in one about 35 degrees, a perfect natural bath in the middle of the forest. 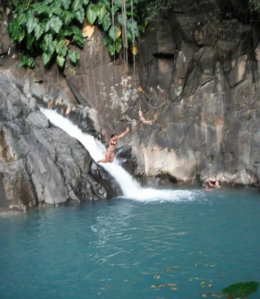 We met some friends in Bananier who had just finished surfing, and then had a picnic lunch on a dock in the city of Basse-Terre on the southwest corner of Basse-Terre. We hiked next to la Cascade Acomat, a beautiful waterfall pool that you could cliff jump into from any side at any height. We ended our day in Grande Anse, what Francois described as the most beautiful beach in Guadaloupe. We watched the sunset there, with a row of other waiting spectators, and as soon as it fell behind the horizon, stayed for the after show – a sky of pink and orange clouds in a darkening sky.

That night Francois’ friend Francois (it’s a common name) hosted a pizza party. In true French style, we paired the home made pizza’s with red wine, and finally went home early for an early, good nights rest. The next day I stole some beach time and wifi from the Hotel Fleur D’Epee, to plan my ferry down to Dominica – my next island destination back in the Caribbean.