Sierra Leone is one of those West African countries that I expected very little from. I had no expectations of the place, no images in my mind, and the name implies it would be Portugese speaking. Instead, its one of the few English speaking countries, one of the most densely populated, and exports, like Liberia, include diamonds and rubber plantations. I didn’t sit still for very long in Freetown, but just the place names taught me a lot of about its history; Freetown was named such because, like Liberia, it was the settlement of North American freed slaves. Sierra Leone was the name given to the country because when the first Portugese settlers approached Freetown from the sea, it’s a harbor backed by huge mountains, which look like a crouched pride of lions protecting the steep slopes and valleys between them. 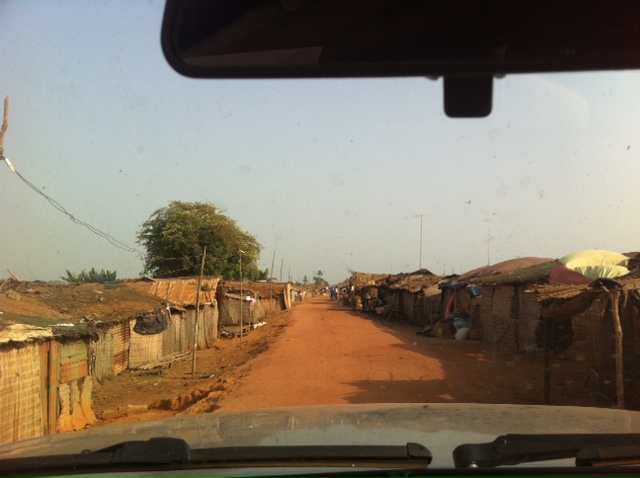 I ended up crossing the whole country of Sierra Leone, taking the road north from Freetown to Conakry too.  The road to Guinea was worlds away from the journey I had made just days before, since it’s a fully sealed, 2 lane, painted, EU-funded highway with kilometer markers every 2 km. Its only 311km between Freetown and Conakry, which should only take 4 or 5 hours, but somehow it didn’t phase me when it actually took 10-14 hours. First it takes over an hour to get out of Freetown, but you have to account for unforeseen delays, like when my taxi ran out of gas in the middle of traffic. Then, it only takes a couple hours of traffic-free highway driving to the border, past rubber tree plantations and the rolling countryside spotted with little villages. The border alone takes a couple hours, and then the last 130km from the border to Conakry is the slowest, longest 130km I traveled in all my west Africa adventures. 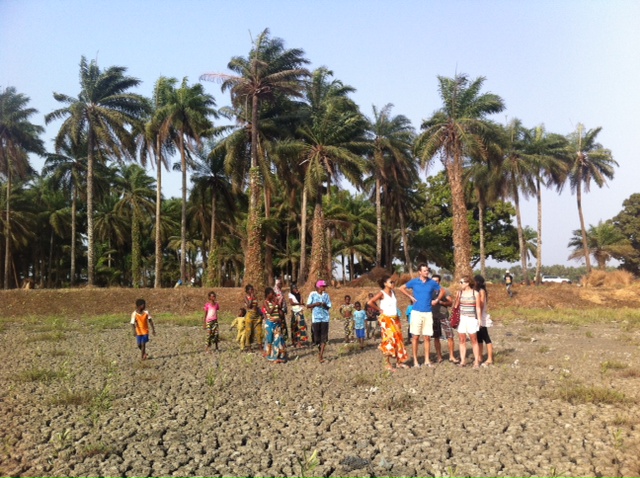 It took me 2 hours to find a seat in a car leaving from the border to Conakry, since the conditions of the road and new import/export regulations have made land-border traffic and trading much less popular between Sierra Leone and Guinea. The car I finally got into is supposed to hold 7 passengers, but we were 1 child, 2 chickens and 11 adults, including the driver. The sun set shortly after we left, and only the brakes and bumps along the way proved to me how bad the road really was. We swerved around potholes and side roads that I couldn’t see in the dark or through the dust, and finally reached the outskirts of Conakry by 9 pm. Little did I know that these last 30km would go even slower (2 hours!), since it’s the only road into the city on the end of a narrow peninsula, where all the traffic bottlenecks and creeps around the new highway being built. They’ve torn down all the houses on the side of the road works, just for cars to be able to pass while the foundation is laid, but every rainy season sets back their work and the tarmac will probably never get laid.

I realized I should start my journey back a little earlier, get a head start on the day and avoid some traffic, give myself some more time. I went at the first call of prayer, shortly after 5 am, to a sleepy carpark. Deserted cars stood crowding the lot, but I was one of the first customers to arrive. I first watched the sunrise. Then sleepy drivers started crawling out of their cars where they had been asleep. Then the market sellers started setting up, and the ladies with breakfast and men with coffee for sale. By 9 am it was a bustling medina, but only 4 out of the 9 car seats had been paid for in my shared taxi. At 10:30 it started to get hot and I was tired of waiting, so I paid for 3 seats for the taxi to leave for the border.

As they tied down all the baggage on the roof of the car, the taxi destined for Freetown direct also filled up and left. I thought “damn, should have taken that one.” But then, a few hours later, we passed that same taxi on the side of the road, smashed into a truck, and I felt instant gratification for taking the car I was in. We passed a semi-truck flipped on its side, its 50kg rice bags scattered all over the steep corner it hadn’t made. I saw 2 motorcycle accidents, and then we got a flat tire. At least our problem was fixable, and I reached the border in time to find an onward taxi to Freetown. The car and driver both seemed promising, but then I realized the driver was a devout Muslim and we made 2 stops along the way for prayer time. That added an hour to our journey, and his coal-collecting and dropping off was another hour, so in the end it took me just as long to make my return journey.

my Freetown goodbye party was thrown by these kids

For anyone who’s googling how to make the journey from Freetown to Conakry, just make sure you give yourself an entire day, and delays and waits are just part of it, so don’t believe any guidebook or local that tells you it only takes 5 hours.

One thought on “Between Conakry and Freetown”

Katrin is currently staying put in Iceland. The current global situation has put traveling on hold for a few weeks, or months, and she´ll only get back on the road again when it´s safe to do so. Hopefully everyone is staying healthy at home in the meantime!