Traveling by bus has been a hit or miss experience. Some of them are airconditioned with reclining seats, while others are “jeepneys,” which is basically an old-school Jeep stretch limousine – the local form of short-haul public transport. Its got open air windows down the whole length of it, and when the 2o or so seats fill up, you can sit on the roof or stand on the tailgate hanging off the back. They say no 2 jeepneys are alike, since their all custom welded, adorned with religious trinkets, and all colours of the rainbow, so it would be hard to make any two alike even if you tried.

Long-haul bus seats are sold with different class descriptions like “Deluxe” and “Exclusive Junior,” and always advertised with or without CR (“comfort room”). I thought this was some type of extra leg room, but only figured out on my last day in the Philippines that it means WC… so the comfort room is a bus with a toilet, which would have been good to know the night we opted out of a CR bus on an overnight journey and I had to stop the bus in the middle of the highway in the middle of the night to pee in the pitch black bushes. 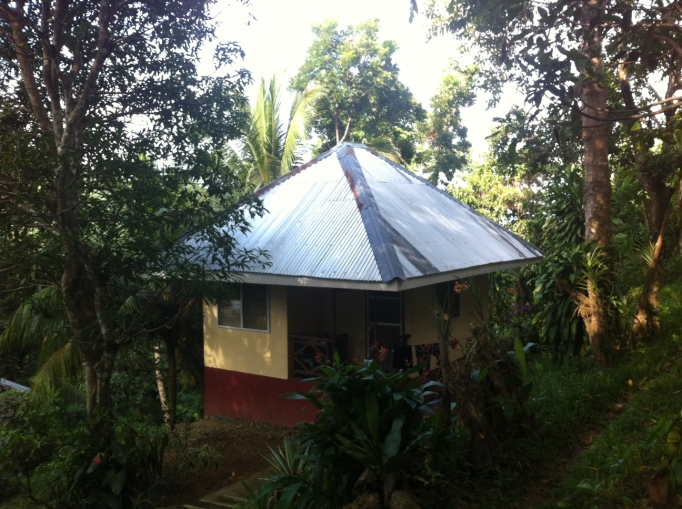 our “semi-native” bungalow at Valle Verde

My favourite place in the Philippines so far was on Guimaras Island, an eco-oasis set in the middle of the green hills called Valle Verde Mountain Spring resort. You could see the ocean and the sunset from the restaurant patio, and there were only 5 rooms and one treehouse hidden in the forest canopy below. Some 300+ steps tied the resort together, with a pool and picnic bungalows in the center. The ‘mountain spring’ was just a little stream at the bottom of the valley, but sometimes they direct it into a little concrete pool where you can escape the killer mosquitos for an all-natural spring bath. I also loved our beach-side time in Guimaras, but mostly for the little villages we were nestled between, since the room didn’t even have a window but I did get 2 free cockroaches in my backpack.

I noticed that Filipino’s love basketball, with make-shift nets set up on temporary courts in the middle of streets or fields or wherever possible. They had a pickup game near where we stayed at Hoskyn port, but it was too embarrassing for me to even think of joining. The baskets are rolled on a platform with wheels, and the little platform stacked with heavy rocks to counterbalance anyone tall enough to dunk the ball (still haven’t seen that and I’m not sure its even possible with their average height). 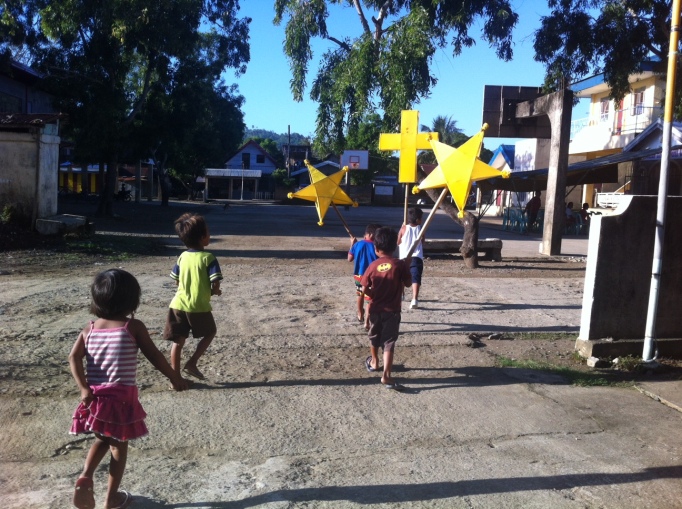 kid crusaders on their way to the basketball court

I heard my first Christmas song on October 3rd, about 1 and a half months too soon, but Feliz Navidad (which we can appropriately thank the Spanish crusaders for) blared over the loudspeakers in a little supermarket while I experienced another first. On the shelf infront of me, in the “skin and health” aisle, where I had been looking for bug spray, stood a bunch of aloe vera and sunblock, and I learned that Nivea doesn’t sell bronzing cream in the Philippines, but “Whitening Spray,” which promises to leave your skin looking paler and lighter than before. That kind of fashion trend is also why outdoor workers keep covered from toe to head, even when its blazing hot, just to avoid the sun on their skin and risk being even darker than they already are.

I wondered what they thought of me, that stupid tourist lying near-naked in the sun on the beach to get a little tanner, when I could be so beautiful in their eyes if I just stayed my white Caucasian self… but instead of dwelling too long on it, I decided to beautify myself in a way they’d also approve. I bought a $2.50US pedicure at one of the countless, under-charging spas in Iloilo city, killing time before my flight back to Manila and taking advantage of the airconditioned mall while it poured outside in the humid heat.