Papua New Guinea is a huge place, with more animals and plants than scientists even know exist. They’re still finding new species of birds and strange marsupials*, and haven’t even covered half of the country’s densely forested highlands, still inhabited by tree-dwelling tribes that speak over 700 languages. Although it seems like an obvious tourist attraction, the infrastructure is nearly non-existent, and in fact, the tourism industry that once was is even dwindling, since during their colonial ties with Australia in the 60’s and earlier, many more tourists used to come and tour companies and services have since slowly disappeared. Now there´s hardly any recognition of a tourist, traveler or budget backpacker, but the resident ex-pat on holiday or government official largely make up the clientele for guesthouses and domestic fliers.

The official languages are English and tok pisin, a kind of pidgin English mixed with some german words, but its hardly a mutually intelligible dialect since a native English speaker wouldn’t understand more than 80%. Its not a complicated language, so learning it would come quickly, and reading it was slightly easier, since its actually quite simple and phonetic. Ten Q is how they write thank you, and wantok or 1tok means one-talk, and your one-talks are the people from your village who share one of the 850+ local languages with you in addition to the universal tok pisin.

The form of public transportation is in mini-vans or Land Cruisers called PMV’s, “people mover vehicles.” If they’re longer than an hours journey, they make random stops along the side of the road for pee breaks, market shopping, or fresh water holes.

The local beer is a big capital SP (South Pacific) in yellow on a green can, and its plastered the same way in every other shack that sells it, warm or cold, sometimes they’re out, you never know. They’re not cheap, at 2 euros each, but I wanted to buy 4 from a guy who was sitting in for the lady boss, and he couldn’t compute 4 times 6, but she had written a time table in her notebook “1xSP= 6 kina, 2xSP=12kina, 3xSP=18 kina” etc. He did very well at making change of 1 kina for my 25 I paid him.

The prices of things here are outrageous. Like, think expensive, then double it, then that’s what you should expect. One guy told me he paid $1000 per month for internet (800 euros for 20GB was his exact quote), and to rent a Land Cruiser costs $500 Australian dollars per day… including the driver but not including fuel. A crappy hotel can cost anywhere from $75 to $175 per night, and somehow they’ll still fill up with government officials and visiting NGOs or volunteers from abroad. An internal roundtrip flight will cost you more than going to Australia and back, and the less than 2hr flight to Honiara, capital of neighbouring Solomon Islands, will cost you more than flying from Auckland to London. But, ironically enough, there are still tribes in PNG that use a special type of shell as legal tender, and this currency is often used in dowry payments, even by foreigners marrying a local. 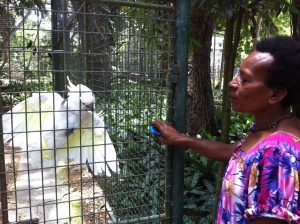 the cockatoo begs for a scratch from the meri

A woman is called a “meri,” and most ex-pats have a house meri, and I was the visiting white meri. I spent a day with one of my couchsurf host’s meri, and she took me to the Nature Park/Botanical Gardens in Port Moresby to cuddle some cockatoos and other beautiful birds. They have birds of paradise and plenty of the same-named plant, and in one bird atrium, a lorikeet took a fancy to a students afro and tried to mate with his head. The cassowaries, beautiful black versions of an emu with multi-colourful heads, were in bigger pens that we walked above, and my house-meri guide wouldn’t come within 10 feet of the snake or crocodile pens. We saw more types of kangaroos than I knew existed, especially off the Australian continent, and the wallabies and tree-kangaroos cuteness could have melted a grown man’s heart. After a kid-in-the-park afternoon, I offered her some money in gratitude and she eagerly replied “thank you! I love you!”

The men and meris love to chew betel nuts, which kind of look like miniature green coconuts, and inside is a yellowish white seed thing that they chew, with the help of some green mustard stick and some white lime stone powder. It looks like flour or cocaine, but apparently that’s what happens when you burn lime stone. The biggest mystery is how it all turns blood red, and people’s smiles are stained so brightly red that it looks as if they’ve chewed a whole tube of lipstick. They spit out mouthfuls of bloody spit, more than you’d believe fits between their cheeks, and after a while it stains their teeth so black that only a few remain among their rotting gums.