There are a couple of islands in the South Pacific that I knew I wouldn’t get to. Some of them are nearly impossible to reach, either because of location, geography, or just lack of travelers. They’re usually the islands you’ve never heard of, and survive off their colonial dependents. One of these is a country called Wallis & Futuna, a French territory that you can only fly in or out of through Noumea or Nadi a couple times a week. Another is Pitcairn Island, a British overseas territory in the South Pacific lost somewhere between Tahiti and Easter Island.

I never thought I’ make it to Niue, “the rock” island near Tonga and Samoa. It’s technically a self-governing state, but relies heavily on New Zealand for support and subsidies, and the only way in or out is a very expensive seat on the once or twice weekly flight from Auckland (at 3 hours flying time, it’s hardly the closest port but that’s really the only flight!). Its essentially big coral island, raised out of the sea and perched ontop of an extinct volcano. Top soil isn’t so bountiful, and it was strange to see graves scattered all around the roadside and front-lawns. It was eerily fitting with all the deserted houses, devastated by Cyclone Heta in 2004 and other big storms before then.

a common sight in Niue, houses half blown away

Niue’s 1500 Niueans live on an island that’s 64km around, but only have a couple beaches and no mountains (the highest point is 65m above sea level). Their official work week is only from Monday-Thursday, so its the first country I’ve ever been to with a 3-day weekend and that ain’t bad. The only thing I could complain about were the nasty looking yellow hornets that were always flying around everywhere… but they never got me so it’s all good. All around the islands’ cliff edge is pretty blue water, living coral and an abundance of fish and sea life. I went snorkeling with some spear-fishers, and after seeing a turtle, barracudas, parrot fish and dozens of striped sea snakes, they shot a parrot fish and a coronation trout that we had for dinner.

I stayed at Niue Backpackers, which is the upstairs apartment of the Niue Yacht Club. It only has 4 rooms, but I was the only guest, so for $25 a night, I had rented my own sea-view penthouse. I also adopted my own pets: Lucy the dog who followed me to the beach for protection, and Misty the cat who I gave milk to but stopped being my friend after she shit in the shower and I kicked her out of the penthouse for a night. One morning I woke up with a crab in my bed. I had the sensation that something was tickling down my back, but assumed it was my hair. Then when I rolled over, I felt a tickle run down the back of my leg, and when I threw the blanket off expecting the worst, I first saw a massive grey spider. But, with further inspection, it was only a small silver crab, looking lost and exposed from what he was hoping could have been a safe cave to hideout in. 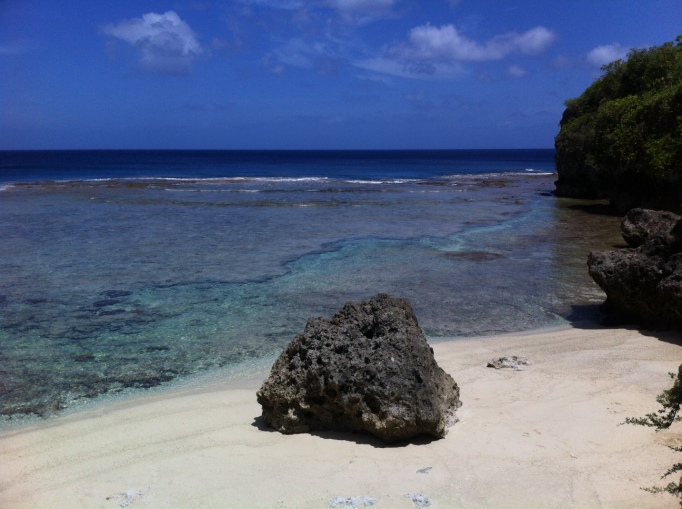 the local beach and snorkel lagoon

The only radio station in Niue gave an interesting, unique blend of songs. The sound of gospel songs was replaced by offensive rap and old school hiphop, followed by poppy Christmas songs that were replaced by Polyensian hula-dance songs. Then the cycle would repeat itself, pulling my emotions along with it, not sure if I should be feeling reverent, gangster, festive or drink a pina colada.

The phone numbers are only 4 digits long, so I could easily reach the hostel owner Brian by dialing 4567. But he was always downstairs, so it was easier just to walk down and talk to him. He took me on an island tour, driving all the way around and stopping at a few caves and chasms and perhaps the only real beach. There was one sand patch down the sea-track path beside the hostel, but it was only exposed at low tide, which I managed to time perfectly for two days of beachside reading. I finished Dan Browns Inferno and learned a lot about Dante and Florence, and hung out with an old American hippy named Charles who loved to talk about the theory of ecotourism.

Niue’s sculpture garden, made of rubbish

There’s another island I’m not sure I’ll make it to, called Tuvalu. Its just a series of 3 tiny sand atolls between Samoa and Kiribati, and theres no piece of land big enough to make an air strip. The whole country is a less than 10 square miles, and probably shrinking with the rising sea levels. Since its surrounded by a coral lagoon, cruise ships cant come there either, so the crowded population of 10,000 people only get served by a twice-monthly cargo ship that sails from Samoa. Im going to Samoa next, so I’ll be the first lined up for a ticket on that cargo ship. I’ll hang my hammock on deck for the 5 day return trip, and hope the cyclone season won’t make the sea too rough.

One thought on “Ever heard of Niue?”