Macedonia has a lot of claims to fame. To begin with, Alexander the Great was Macedonian, and gets referred to as Alexander the Macedonian by locals. St. Cyril, the inventor of the Cyrillic alphabet in the 9th century, used it for his missionary work in the Slavic countries and helped spread the Orthodox faith throughout the Balkans. The holy city of Ohrid is a famous tourist and pilgrimage destination with 365 churches. Ohrid also has one of the oldest universities in the world. Mother Theresa of Calcutta was born in Skopje, Macedonia’s capital. The city of Skopje also has some infamous moments in history, like the 6.9 richter scale earthquake in 1963 that nearly leveled the whole city, and the infamous claim to fame as one of the most polluted cities in Europe. But neither Skopje nor Macedonia are in the same location as they were historically…. Causing some issues with Greece who believes the real Macedonia is in Greece and they deserve claim to all Macedonian fame and glory. 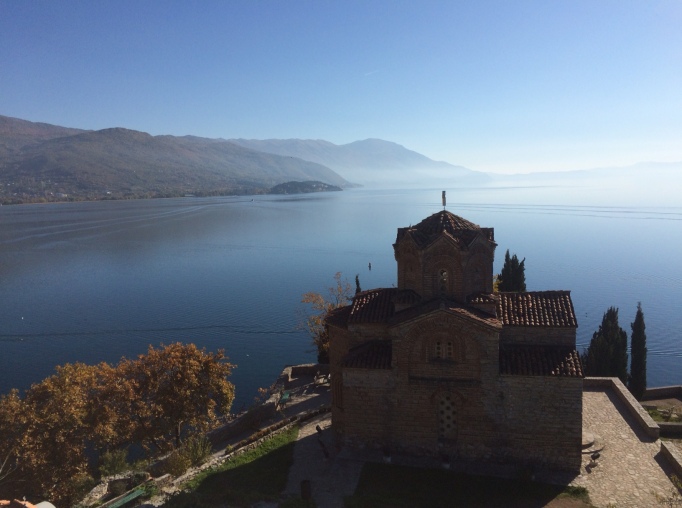 Macedonia is also famous for tobacco and wine. The city of Prilep is basically one big tobacco field, and you can buy Macedonian wine in all of the surrounding Balkan countries. Macedonia had a similar history to its neighbours, passing from the Romans to the Ottoman Empire and then Yugoslavia before becoming independent in 1991. It’s people are a mix of Macedonian, Albanian, and Serbain origin, plus a few Turks and Greeks, and a healthy mix of Muslims, Catholics and Orthodox Christians, plus a minority of Jews that were spared from WWII with the help of Albania. Despite all these curiosities, Macedonia still remains a poor and unkown country to many, and I had no idea what kind of place it would be to travel. 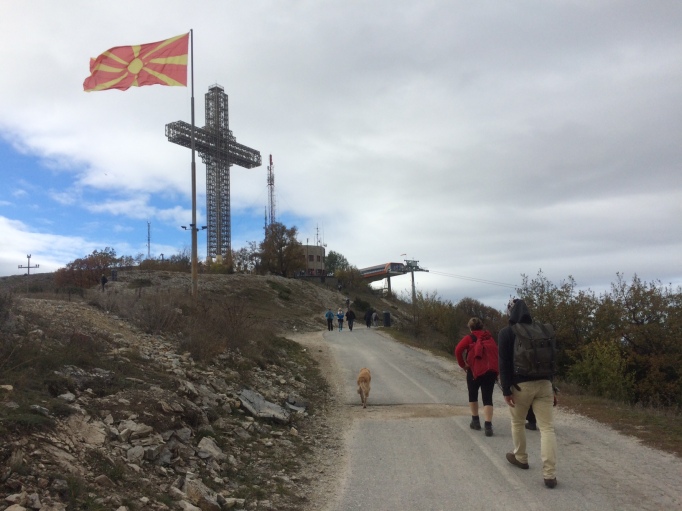 the top of Vodno

I couchsurfed with this guy Andrej and his dog, in a house beside the train tracks that shook every time a train rolled by. But many of the train services have been suspended since they’ve become flooded with thousands of refugees passing from Greece through to Serbia. Ive heard that as many as 6,000 per day may be passing through, but they don’t stay long, as they’ve got their eyes set on Germany and northern Europe. I didn’t meet any or see any trace of them, but I also couldn’t use a train to get to the south of Macedonia. Instead I took a bus to Bitola, only 16km from Greece, but still everything seemed as it should be.

It’s a landlocked country, full of beautiful lakes and mountains, and the highlights were Mavrovo park, Matka canyon, and Ohrid lake. There was a tiny monastery in the hills near Prilep called Treskavec, which may have been one of the loneliest places I’ve visited. Hiking to the top of Vodno mountain was amazing because we actually walked above the pollution line, seeing miles of mountain tops around us while the city of Skopje lay under a foggy blue mist. The city reminded me of others I’d been so far, the strange mix of decaying communist residential blocks, road works and construction sites, and the new and shiny development projects. 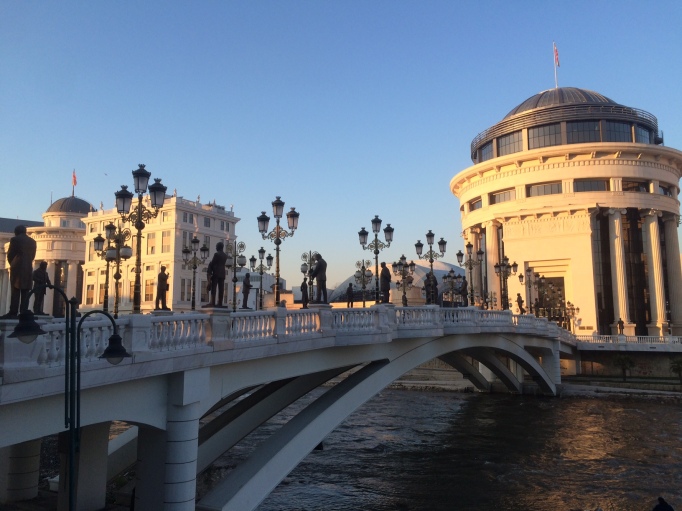 In Skopje they’ve built an entire new city center, of brand new buildings that are meant to look like they’re from another century, and two pedestrian bridges that look like they belong somewhere between Disneyland and Charles Bridge in Prague. They’re lined with the immortal faces of Macedonian musicians and artists and other historical figures, and look miniscule in comparison to the even larger statues of a naked Prometheus, St. Cyril and Methodius, Alexander the Macedonian and other war heroes riding horses. They’ve even cast Mother Theresa into a 30 m bronze statue, so unless they’re planning to build another bridge, they may not have space for any more great Macedonians.