If you’re into food and cooking and restauranteering, you’ve probably heard of the competition Bocuse d’Or. It’s namesake, Paul Bocuse, is a super famous and savvy French chef who’s had 3 Michelin stars at his restaurant just outside of Lyon for over 50 years straight. He brought French cuisine and French chefs to the forefront of fine dining and international gastronomy, and created the Bocuse d’Or competition in 1987. It’s a 2 day compeition that happens every year, first every two years on a regional level (Latin America, Asia-Pacific and Europe), then every alternating year, the ‘worlds’, some sort of a cooking Olympics (which includes the winners from each region, plus Canada, the USA, and Morocco, and 2 ‘wild card’ invited countries). In the end of each Bocuse season, you have 24 nations in Lyon every other year competing for the Bocuse d’Or. 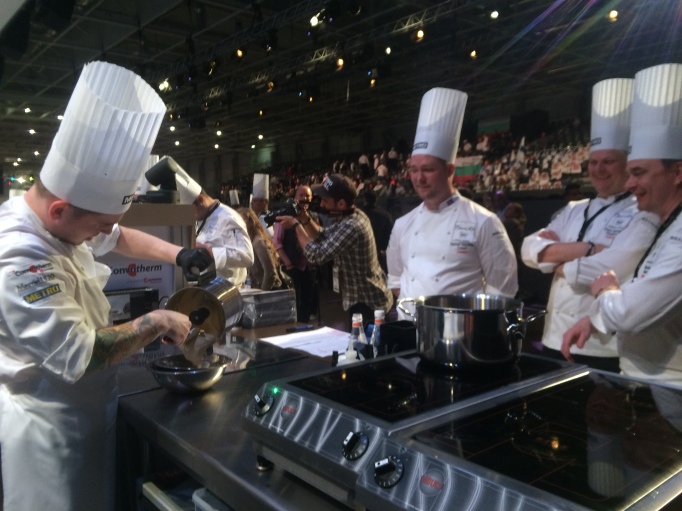 Coach Siggi Helga and Icelandic Bocuse president Sturla supporting Viktor during the competition, while the stands behind fill with screaming fans

Iceland’s best placing was 3rd, winning the Bocuse d’argent. Silver, Bronze and Gold mark the podium winners, and there’s even one crazy Danish guy who has competed three times and won one of each… The European selection and Bocuse d’Or Lyon have started to be pretty consistent in the last 5  or 6 years – Scandinavian countries are always on the podium, and often the only ones on the podium. Norway, Sweden and Denmark have many medals under their belt, and Finland and Iceland are never far behind (Iceland has never landed lower than 9th place in either the European or Lyon competition).

The competition is super complicated, but can be broken down into a few words to explain it simply enough for you and me to understand. Each country sends a Chef and a commis (an assistant that acts kind of like as sous chef that has to be under 23 years old) that have 5 hours and 35 minutes to cook two gourmet courses for 24 judges. They plate 24 fish dishes, and 24 meat dishes that have first to be presented on a showy catering platter, then split up into 24 portions. The fish and meat produce are the same for each team – this year it was Sturgeon fish (and its caviar) and Hungarian Young Red deer. The rest of the meal is imagined and designed by each team for months prior to the competition. In addition to the chef and commis, the team has a Coach and a President (officially), plus a dozen other behind the scenes experts to help (designers, second assistants, promotional managers, and millions of kronurs worth of sponsors who all have a say).

Team Iceland relaxing after their grueling 5 hrs and 35 minutes

Viktor Örn was this year´s chef to compete, one of 20 chefs and nations represented, and placed 5th in the European Selection. He also won the prize for the Best Fish Dish. Only one other chef, Siggi Laufdal, has placed higher in the pre-competition, 4th place in 2012, and also won the Best Fish dish prize. After the podium is filled with the overall winners in both dishes, there is a reward given to the highest earned points in each dish, one for meat and one for fish. There’s also a prize for the best commis, and the judges are the presidents of each competing country, plus 4 honorary judges (Paul Bocuse’s son and previous Bocuse d’Or winners or presidents of hosting countries).

this years Bocuse Europe was hosted by Hungary in Budapest

Viktor Örn is a good friend and an unbelievable chef, having won the Icelandic chef of the year in 2013 and the Nordic Chef of the year in 2014 (he’s HOT at the moment), so stay tuned to see how he does in Lyon for the Bocuse d´Or 2017. Better yet, come and support team Iceland at the event, since it´s a one hell of a time… and our humble little country never has as many supporters as the others, even though we´re so much better than most of them 😛