I kind of ended up accidentally in South Africa. After my 30th birthday in Mauritius, country #201, I had only a few one-way options out. London, Dubai, Johannesburg, or one of the Indian Ocean islands I had already been to. It wasn’t nearly time to go home, so South Africa was an obvious choice, even though I’ve already been there twice. 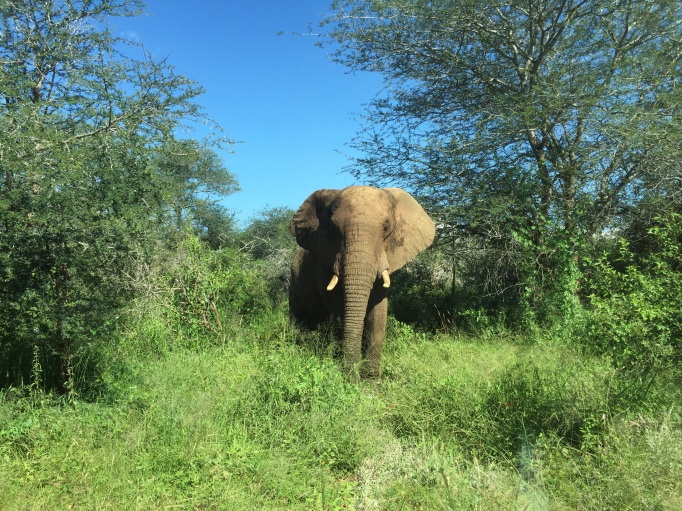 up close and personal with a Kruger elephant

I flew into Johannesburg, where I had a couchsurfing friend I met 6 years ago in Rwanda to stay with. Thru the wonderful world of facebook, I realized two Latvian friends, who I know from Iceland, had also just arrived in Johannesburg. They had rented a bright yellow VW we nicknamed ‘Lil’ Miss Sunshine’ and spontaneously left for Kruger the very next morning. There we spent 2 days on a self-drive safari, saw 4 of the Big 5, and nearly got trampled by an angry elephant bull three times the size of our Lil Miss Sunshine (I don’t think they like yellow).

me and the Latvians at Berlin Falls

On the way, we stopped in Nelspruit, where we couchsurfed with a woman, all her cats and one Jack Russell Terrier I had to share my couch with. Her boyfriend is part of the band Minanzi Mbira, and we watched one of their rehearsals in a storage garage late at night, joining in for the precussion bits with drums, triangles and shakers.

We roadtripped past waterfalls, swimming holes, the Bourke’s Luck Potholes, and thru the Blyde River Canyon, taking countless selfies from all the panoramic views along the way. Later we went to Durban, visiting the valley of 1000 hills. We visited an orphanage, ate Indian food that tasted even better than food in India, and then went our separate ways, I, to Lesotho.

the chain ladder up to Tugela

Later I roadtripped with my South African host to Golden Gate National Park and the Drakensberg, where we frolicked inbetween and ontop of mountains, with stunning views down to the Irish-green valleys. The chain ladder up to Tugela Falls nearly gave me vertigo, but it was all worth it once we got to the top and went skinny dipping in one of the frigid pools above the falls – the world’s second highest. 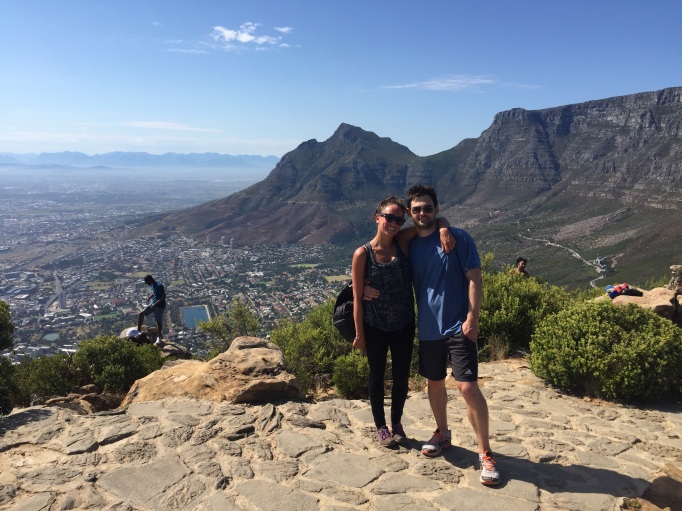 On top of Lion’s Head, with Table Mountain in the background

I spent a week in Cape Town, including a day of wine tasting in Stellenbosch. I stayed in SeaPoint, and one of the roomates there had a horse we could giddyup. We spent our days beaching, or hiking at Newlands Forest and Kirstenbosch Garden. There was a swing dance festival kicking off my last night there, and lots of great coffee, wine, and food everyday.

My base for all these adventures was Johannesburg, which I had never really thought of as more than just a base. Its reputation for being a big, sprawling, dangerous city really changed when I got to spend a few weekends tieh locals, exploring the restaurant and nightlife scene. Neighbourgoods Market was a major highlight, a Saturday food and beverage festival where an old fried from UBC randomly sat across the picnic table from me. After giving eachother long, awkward glances (neither of use could remember eachothers names or just where exactly we knew eachother from – or if we were just doppelgangers), I finally asked where he was from, and answered ‘Vancouver’ in a perfect Canadian accent. Then our worlds collided as we remembered all the stories, friends, and parties from Totem, our residence dorm, 10 years ago. Small world, eh?