I’ve traveled around the Pacific before and remember thinking Wallis & Futuna would be something like Pitcairn Island – totally unreachable and complicated to plan. When I landed in Suva from Tonga in 2015, I saw a Wallis flight boarding, flown by New Caledonia’s airline Air Calin, and found out it’s not that crazy to get to, or afford.

It was my main destination this time around in the Pacific. Direct flights go twice weekly from either New Caledonia or Fiji, and even thought the 1.5hr flight is overpriced at more than $200US each way, it’s still cheap compared to a lot of other pacific island destinations. 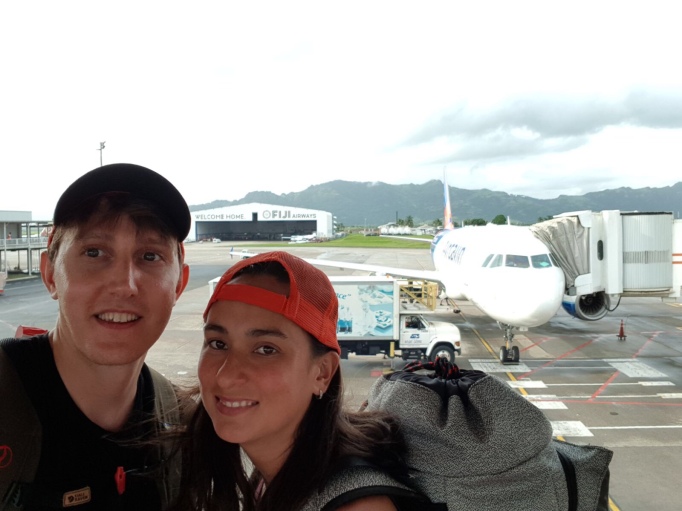 Jono and I in matching hats on our way to Wallis

It’s part of France, not a department or territory, but an “island collectivity” that still allows all residents to have French citizenship and all associated benefits. The population is just under 12,000 – 3,000 in Futuna and 8,000 in Wallis. Futuna is connected to Wallis by a tiny jet, but when the weather allows, flies multiple times a day, even though the distance to Futuna from Wallis is nearly as far as Samoa or Tonga. When the weather’s not so good, you can get stuck in Futuna for days, weeks even – the longest I heard was 6 weeks. With no ferry option, and the weather presumably too bad to sail, there’s no other option than to wait (Atleast they finally got an ATM and credit card payments working since November last year). Considering it was still the tail end of cyclone season, I decided not to risk it and visited only Wallis.

Couchsurf camp, when the mosquitos and heat are too much inside

I was traveling with a friend who lives in Suva, and though he’s “European” too, it was weird for us both to be greeted by French immigration. Apparently 5% of the island is employed in government jobs, and all the teachers, nurses, doctors, dentists, lawyers and police seemed to be métropoles, so atleast 5% of the island is actually French. The rest identify as Wallisian or Futunan, and there’s a minority of Fijians, mostly for their rugby team.

one of many impressive churches in Wallis

We couchsurfed, which was a feat in and of itself, since internet has been around for 10 years, but cell phones only the last 2 years, with barely enough bandwidth for smart phone apps. Our host was Michel, who had tan lines on the smile lines around his eyes. He was one of 3 dentists on the island, who had been working there for nearly 15 years and may retire at the ripe age of 55. He called himself a simple man, and lived in a shack with only mosquitos and giant cockroaches as roommates, and some retarded chickens and an extremely obese, angry pig as neighbours. We slept outside unable to bear the heat and bites without a mosquito net or fan, in a little shanty camp that atleast kept us breezy and scratch-free.

He was an excellent host, picking us up at the airport (there’s no bus), and driving us all around the island in a day. It doesn’t take more than 15 minutes to get anywhere, but there is quite a bit to see on this 250sq. Km Island. Most of the main highlights are large, imposing churches (99% of the population are devote Catholics), and tourists usually make it to Lalolalo crater, a volcano that filled with water and is now home to the sunken machinery of the American army who refused to give it to the French after WWII. Not much to do, but plenty of water to see and explore by kayak. We went to two islands off the coast of Mata’utu, but the shallow lagoon meant Jono preferred to walk than row. There was plenty of rain too, but it’s hard to flood a rural island living sparsely dotted around dirt roads, in sync with nature for hundreds of years. But apparently the heat and mosquitos have gotten worse, which was a relief for my pride as a whiny traveler.

We were extremely lucky to experience both Wallisian and Futunan culture, visiting the weekend when thousands of teens and youth were congregating for dancing and cava ceremonies with all their village chiefs. We met some expats our age that took us to the only nightclub on the island, which roared after 2 am Saturday night, and the traditional dancing kept going.

A cyclone was predicted to hit Fiji the day we left, and thought we may get rerouted to New Caledonia where our adventure could continue, but it seems my bad streak of flight distortions is finally over. Let’s see if I can get stuck somewhere in Fijian paradise instead.

4 thoughts on “Where in the world is Wallis?”