Iceland is a deceiving name – we don’t have that much ice, or even snow, and our mild, sea-tempered winters barely keep anything white or frozen on the ground. People may think it’s a skiing destination, but we don’t really have mountains worth writing home about either, but a few big hills around the north are still definitely worth a visit.

Tindastóll, just outside of Sauðárkrókur, is now home to the longest run in Iceland, thanks to a new T-bar lift opening a couple of weeks ago. A few kilometers further north is Ólafsfjordur, home to arguably the shortest runs you can find in Iceland, but the only ski area that’s actually right in town, walking distance to the city center. 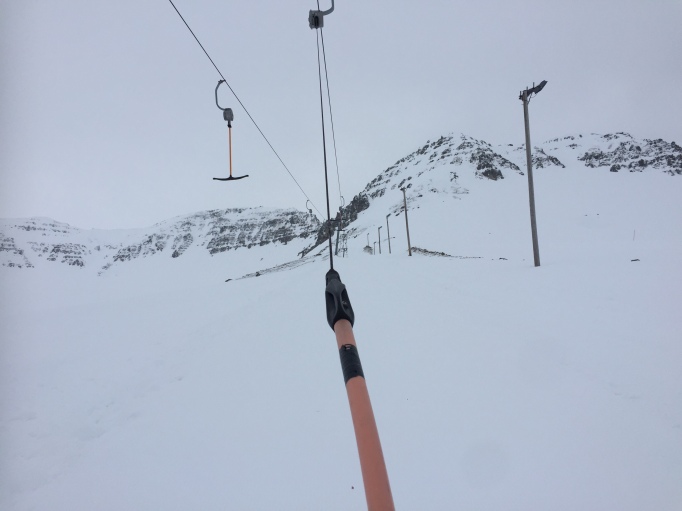 Next door is Siglufjordur town, a great valley with four, excellently-planned t-bars. During easter, there’s even an apre-ski feel when the ski hut gets an alcohol license during the Siglo Freeride festival and thru til easter.

Dalvik has a couple of t-bars, but Id say, as a snowboarder who tried, the second one is only accessible by skiers. The view down to the sea and fjord is spectacular on a clear day, and you’re only a few km’s away from Akureyri. There you’ve got Hlíðarfjall ski area, which is open more days a year than other skislopes, with consistent snowfall and a large enough community to support its running costs.

skiing Dalvik is much easier than snowboarding

All of Iceland´s ski spots charge a similar price, with passes sold by the hour (around 1500-2000kr per hour) or day (4000kr). The 5×5 skiiceland.is offer sells you 5 days to 5 resorts (Olafsfjordur, Siglo, Tindastoll, Hlidarfjall and Dalvik) for around 20.000ISK. If you’re feeling really spendy, and prefer to ski privately, there’s always Deplar Farm hotel, where checking into the all inclusive resort includes all activities – even ski equipment and helicopter time to take you heli-skiing anywhere you please.

heli-skiing helicopter ready for take off at Deplar Farm

If none of that sounds worth it, then just take the short 20 min drive from Reykjavik to Blafjoll (if and when its open) where you can run up and down the same runs half a dozen times before getting bored, so long as you’re willing to wait longer for the lift up then it takes to ski down.