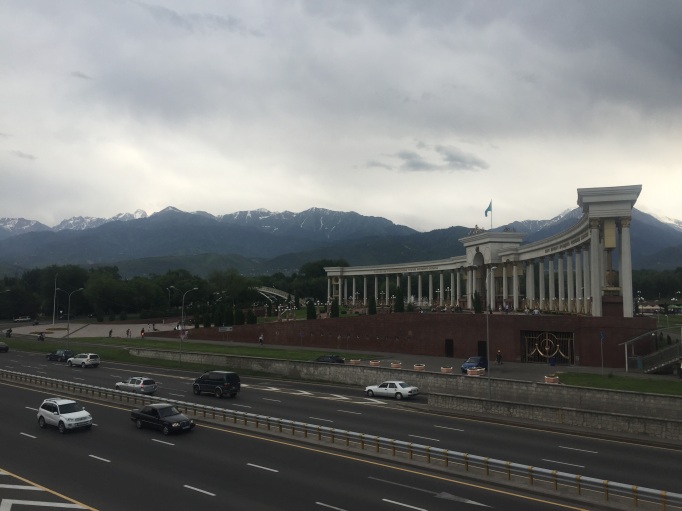 I had a red-eye from Istanbul to Almaty, with the budget airline Pegasus who’s seats don’t recline and you don’t get fed in 5 hours, so I arrived a grumpy and slightly disoriented Katrin at sunrise, 4:50am Friday. After getting thru customs and finding some tourist info, I realized all the country was abuzz for Expo 2017. Public buses start at 5:30am so I slowly made my way into the city center. I don’t know why, but I was a little apprehensive about traveling alone there, a place seemingly so big but yet a huge question mark. 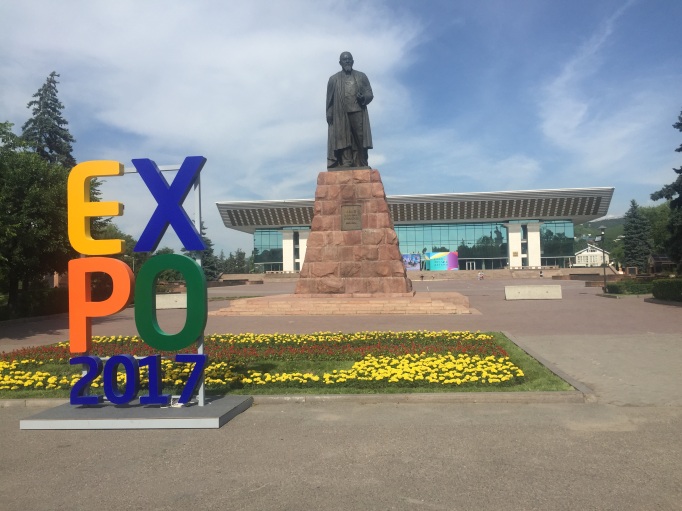 You can’t get your bearings that easily once you’ve arrived either. The faces are a mix of North and East, the language mostly Russian, the religion largely Muslim, and the streets and buildings a showy blend of big, efficient Soviet/communist architecture and Las Vegas wannabe. Shiny, glass towers and Dubai-like malls pop up between the concrete grey, and all the boulevards and blocks are twice too big. The cars are sometimes right-hand drive, even though the roads are too, and everyone has a brand new smart phone and is addicted to Instagram and selfies more than Chinese tourists are addicted to selfie sticks. There’s a significant minority of Koreans and Turkish residents, which also made race and language identification tricky. I barely heard Kazakh, and even ethnic Kazakhs sometimes speak only Russian, but only my couchsurf host and a few of her friends spared me with English. 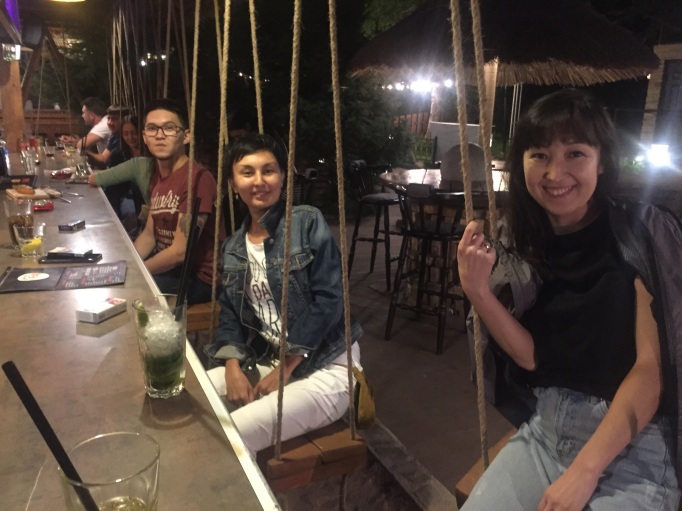 I saw faces which resembled ancient Mongol warriors, but with milky white skin and mouse grey hair. The city of Almaty was spread out below snow-topped mountains whose peaks make even the Alps and Rockies look small. The lush green-ness, even in the city center, slapped summer straight in your face, and a humid 30•c have warm tingly feelies to my barefeet toes.

The nightlife was slightly international but anonymous at the same time. I went to a whiskey bar that made Scottish choices seem limited, and a nightclub sigh exactly the same top40 as New York. I was randomly approached by two separate photographers to take my portrait, just because.

I went on a roadtrip to two places out of the city, and it didn’t take long to feel like I was in the middle of nowhere. Only 25km away from the city center is Big Almaty Lake, a reservoir for the city’s drinking water nestled between white mountain peaks. I lucked out to be there at the same time a traditional Kazakh dance video was being made, and tried to photobomb it, just a little.

Me and my couchsurf host, her son, and a friend with his girlfriend took me to Lake Kapchigai, and nearby Ile river to picnic and swim. It involved an endless, open road, thru a semi-arid steppe where we only ran into horses and livestock, and one turtle crossing the road. We saw some petroglyphs of Buddah from some long-ago Silk Road traveling Buddhists, and marijuana weeds growing wild were just starting to bud. I didn’t try it, but I did have a horse pizza – not quite as exotic for an Icelander, but the local Kazakhs where thrilled I wasn’t offended or grossed out by horse meat, and even more surprised that it was also done in Iceland.

This river starts in China

I left Kazakhstan by road to Bishkek, a comfortable (and incredibly cheap – €5) 3.5hr drive away. The only stops were for a wooden squat toilet and to get gas, and this ‘Royal Petrol’ station whose service area and parking lot covered a plot the size of an American super Wal-Mart, but with only 6 pumps. I guess when you have so much space, why not be a little excessive.