Leaving Paniman was a bit less blissful than our arrival. Instead of taking a boat from the beach, we took the much longer, more tedious overland route back to Naga city, our travel hub for the day. To get a head start on our long day of travel, we had stayed in the land-locked village of Caramoan the night before, with the family of a toothless man whose irresistible smile didn’t allow us to look for other options. From there, we peeter-pattered down south, towards Cebu and the rest of the Visayan islands, but each painstaking kilometer went much slower than we thought, so we got stuck in the hotel-less port town of Pio Duran without a ferry onward til the next morning. 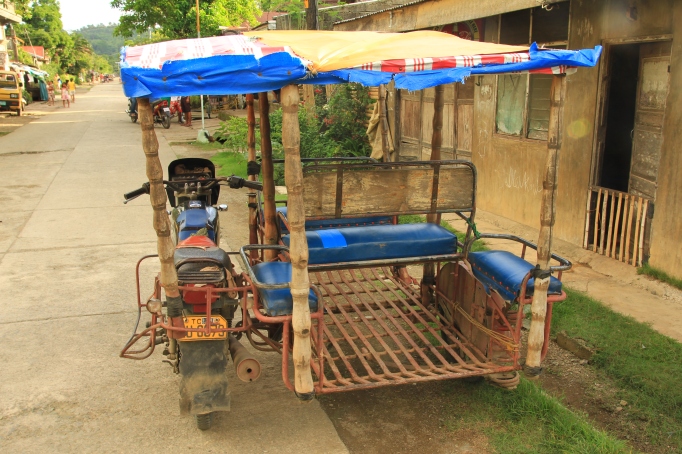 a tri-cycle, aka the Philippino taxi

We made a friend on our way to Pio who invited us to stay with him, but he hadn’t been home in 5 years and didn’t have the key to his house. There was a padlock he didn’t know the code to, but some distant relative in the next town did. We waited for an hour as he tried to sort it out, only to learn there’d be no water or electricity when we got in. After amusing the neighbourhood children with our observing, foreigner eyes (they played really good basketball and danced lines of cuckaracha for us), we wandered back down to the port where a security guard pointed us in the direction of some covered, wooden benches to sleep on. The ferry left at 4:30 so we decided napping on a bench wouldn’t exactly be the same as sleeping on the street for a night… but basically we were homeless traveling bums for a minute.

one of the smaller ferry boats

The food we’d been eating had all been paired with rice, different assortments of meat and veggies with curry or adobo sauces. They always tasted good after a day of sweating and traveling, and the local San Miguel beer quenches your thirst even when it’s luke-warm. We had a couple, plus some locally made sugar-cane alcohol, to lull ourselves into sleepy mode. We boarded the ferry at 3, then curled up on some less-comfortable benches on deck to snooze a bit longer.

At daybreak we arrived in Masbate city, then needed to take a series of tricycles, vans and yet another ferry to reach Cebu. We pulled into the city at 10pm, after 2 exhausting days of travel, but by then the hotel across from the bus terminal was closed (or maybe its been shut down already but nobody knows). We wandered the surrounding streets, only to figure out we were smack-dab in the middle of Cebu-city’s sex-district. We chose the one out of three hotels we checked out based on the fact that it was the only one not available to rent per hour. I think it still had a “No Minors” sign, but I chose not to remember those minor details in lieu of an undisturbed night’s sleep.