I had never flown in a helicopter before, and I’ve missed so many perfect opportunities before. I should have seen the volcano eruption last year by helicopter, but it was ridiculously expensive, and I could have seen the Hoover Dam and Grand Canyon by helicopter, but the wait was too long. Then, a few days after returning to Iceland, my friend Frikki invited me to walk his dog with him. It was 6pm, dark outside, and we played fetch in Elliðaárdalur. He was bragging to me about how he got to fly with the Icelandic Coast Guard the night before. Then he smiled casually and said, “and I’m flying again tonight. Want to come?” 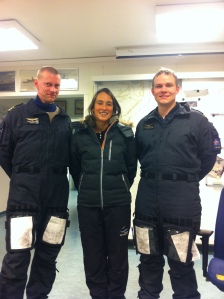 The Icelandic Coast guard rescues farmers, tourists, seamen, and anyone else who gets into trouble when mother nature screws things up. They save injured fishermen from boats and evacuate tourists from glacier crevices – all very heroic, extreme stunts that require them to train full time. The coast guards are a group of manly men, and always fly with one doctor on board since the helicopter functions like a flying ambulance. They wear intimidating uni-suits and helmets fitted with mics, headphones, and some serious night-vision goggles, since they do almost all their training in the winter months after dark.

Frikki is a doctor, not for the coast guard (yet…), and they don’t mind flying with a couple extra people since they can practice mock-rescue situations. We were fitted with some fancy helmets too, and told to do exactly as we were instructed at all times, including the moment when we would get dropped out of the helicopter with just one cable cord as our life line.

After some debate, the pilot decided to fly us to Þórsmörk, a beautiful part of Iceland near Eyjafjallajökull only reachable by foot, horse, or helicopter.

The helicopter they fly is HUGE. Its blades are so long that you’re convinced it’ll fly even though it looks like an immovable tank. I sat in the front of the helicopter, between the two pilots, and watched them flip a bunch of switches, read check lists and make notes, over and over while the blades spun faster and faster. It was completely dark inside, and they had flaslights on their fingers. When it was time for take off, I barely noticed the helicopter lift off the ground, and hoover itself around the building and up into the sky, flying away from Reykjavik city in the most epic way I could have imagined. I put on my night goggles to see better, and everything glowed green.

The goggles are some super tech invention that the most advanced militant forces use, each pair worth more than a car. They transform a pitch black sea into glowing green waves, moving and shining like something from another world. The night sky explodes with billions of stars, and when the helicopter flies full speed, they zoom past the front window like a Star Wars galaxy scene. Lucky for us, the ground was covered in snow, and with the little light that added, our goggles could show us everything. We saw cars driving and people walking, horses running through fields, farm houses glowing with christmas lights, steam rising from geothermal hotspots, and waves break along the coastal cliffs. We saw the city glow of Selfoss as if it was as big and bright as Times Square, and even Hvollsvöllir seemed like an Oasis in the middle of nowhere.

While flying, I became hypnotized by the green world passing under me. The ocean looked possessed, eerily exposed when noone else can see it. The droning sound of the helicopter, almost silenced by my headphones, mixed with the background chatter of the coast guards, sounded like a lullaby pacifying my excitedness. But, my adrenaline quickly returned once we arrived in Þórsmörk; the coast guard put a rope around my body, held down only by my arms, and pushed me out of the helicopter. I dangled like a rag doll, trying to stay as stiff as a board so my cable wouldn’t slip off. On the ground, another guy caught me and held me up against the tornado winds the helicopter was creating, and untied me.

I remember looking up at the helicopter, without my goggles, and watching it like some supernatural, divine object. Without it, I’d be in the middle of nowhere, in the middle of the night, near an angry volcano, blind, and lost. But, of course, it was thinkable only because I knew it wasn’t true, and the helicopter repelled us back up into its safety in no time. Going up was scarier, since I swung back and forth between the wheels of the helicopter uncontrollably for some time before they could drag me back inside, but I was helpless to scream since noone would hear me, and I couldn’t reach my arms out since I’d slip out of my harness. It makes me wonder how they manage to drag up deranged, hysterical or panicking rescue victims…

I wish I could share a picture from my photo memory, since no camera could capture that narrow, green world I saw through my goggles. But hopefully your imagination does it justice, or else I’d suggest making friends with some doctors who know the coast guards 🙂

Katrin is currently staying put in Iceland. The current global situation has put traveling on hold for a few weeks, or months, and she´ll only get back on the road again when it´s safe to do so. Hopefully everyone is staying healthy at home in the meantime!