I grew up with 2 sisters, one older and one younger, raised by my mother and grandmother, sandwiched in a testosterone-dry family. We were raised slightly strict and conservative, with men out-lawed from getting too close to any of us. My mother remarried and divorced in a quick 2 years, and other than that the only men coming around were uncles and ‘friends’ I could never admit were boyfriends. Yet somehow we all knew Ruth, the baby of the family, would be the first to get married. We knew that when she was only 4 years old, still attached to my mothers umbilical cord, and grew up the most ‘domestic’ of us all, baking with my grandma and learning all my mother’ secret recipes. 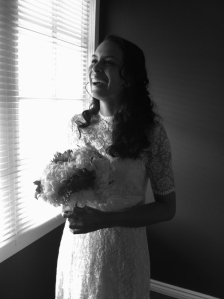 Ruth went to Trinity Western University, a private school nearby my moms home town. She started dating a boy in her second year, and then we all started predicting when the wedding would be. It was still a light-hearted joke after they had been dating a couple years, but before we expected it, they were engaged.

After an 8 month engagement, finishing all their final exams, and graduating from University, they were married a week later. We weren’t surprised, but still scratching our heads with the unusual feeling of marrying off the baby in the family. Me and my older sister, unmarried and childless, were the maids of honour, watching in awe as our youngest sibling out-aged us somehow, as a youthful beautiful bride already starting her life with a man after all these years of being an integral part of our women-only family. 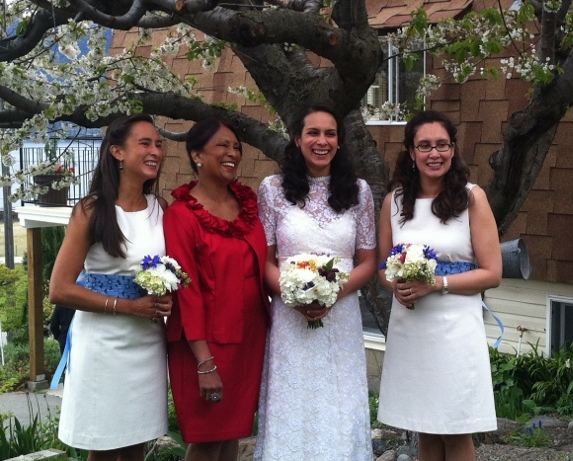 They were married  in a beautiful spring ceremony on an apple orchard in Kelowna, at the grooms home in the interior of British Columbia. My sister wore a $50 dress she found at a bride-swap fair, and layered it with lace from another second-hand gown the grooms sister found for her. She wore a belt around the smallest part of her waist, he hair down and curled, with lacy flats she bought somewhere for a few dollars, and looked like a million bucks. She glowed from the tips of her manicured fingers to the ends of her pursed lips, and her colourful bouqet made from an arrangement of flowers picked from the garden couldn’t distract you from her smiling face.

The wedding ceremony was simple; my mom catered it with home-cooked food, only a few people made speeches, and with no alcohol or dancing, it was over by 9pm. We watched the newlyweds drive away in a blue convertible 70’s Volkswagen bug, dragging behind them cans and balloons, and couldn’t help but feel a pang of loss at the sight of our little sister being the first chick to fully flee our home nest.