Two of my very bestest friends in the world live in the states, so to see them we meet “halfway” somewhere, which is never really half way between us. To get my fill of Clio, who lives in Minneapolis and has already come to Iceland twice, we decided Vegas was the most “central,” not geographically, but financially. Flights to the Caribbean were too expensive, Vancouver was too cold, and we’d already met in New York before.

We’d also met in Las Vegas before, but that didn’t matter. We roadtripped there for my 21st birthday and spent the majority of our 3 days there waiting for me to turn of-age, so couldn’t really say we experienced “adult” Vegas. We didn’t want to gamble, we just wanted to experience some nightlife in one of our world’s most renowned party cities. 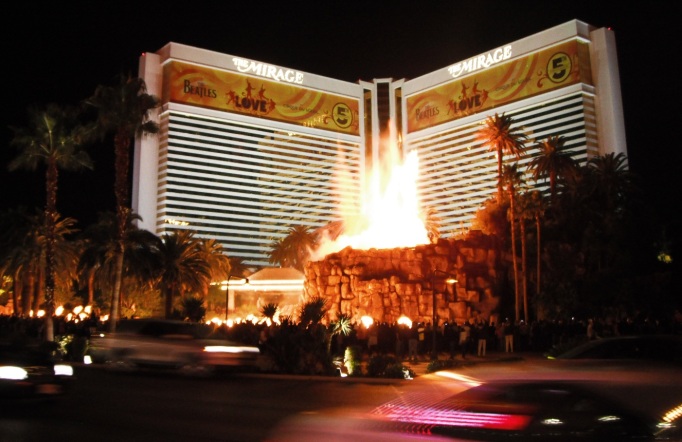 the Volcano show at the Mirage

There was also culture tourism to enjoy. American culture is a strong and unique super culture, a mix of very different states, accents, and skin colours, but still a unified, identifiable place and people. But, Sin City is a specific sub-culture of Americans on holiday in a place built for gambling, girls and getting drunk around the clock. However, I don’t overlook the amazing shows and sights, including the crazy casinos you can never find our way out of or what time it is, and the themed hotels that can temporarily transport you to Venice, New York or a treasure island full of battling pirates.

Me and Clio joined my mom to see Cirque du Soleil’s ‘Ka,’ probably my favourite cirque show, based on a story of oriental warriors orchestrated to rock-n-roll on a stage that rotated 360` in every direction. Sand, sea creatures and warriors slid off it whenever it overturned, unless they grabbed onto one of the hundreds of spikes that could pop out of the ground, miraculously without impaling anyone. There was an underwater scene that captivated me so fully I didn’t realize until after that I had held my breath the entire time I watched the girl swim to the surface, even though she was just moving up a black backdrop with projected bubbles. 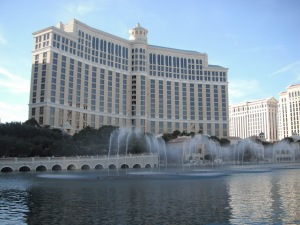 the fountains at the Bellagio are my favourite

We also got tickets to the Lion King, a show with the most incredible costume designs. People were convincingly dressed to look and move just like giraffes, hyenas and warthogs. Although the Lion costume for little Simba was leopard patterned and the baby Simba in the opening scene looked more like a plastic monkey than a furry cub. But that was kindly forgotten with the captivating songs and sounds transporting you to Eastern Africa’s wild plains.

Our nightlife touring we did mostly without my mom, although she joined in for some ladies nights and wristband all-you-can-drink events. We had our first night at XS in the Encore, a club appropriately named after the excessive glitz and glamour décor. Steve Aioki dj’d, with a big yellow blow up duck mascot. It was poolside, with an outside area big enough to host thousands of people, which apparently happens on the regular. We ended up at a VIP table with AFL football coaches from Australia, who kept us entertained with peculiar behaviour – like the guy in the toque who kept scooping icecubes on top of his head for no apparent reason.

Our second night got a little bit more ridiculous, after we ended up at Pure nightclub in Caesar’s palace with 5 or 6 different stamps splattered up our arms to get all access to every corner of the roped-off club floor. There we met a couple beautiful girls, who may or may not have been hired by the older, uglier men with them, who actually made it rain in the club. Me and Clio stood under a shower of dollar bills falling from the sky and filled our fists with exactly $26.  We ended up at an afterparty in a Bellagio suite with what I suspect was French royalty, but I can’t confirm for sure. 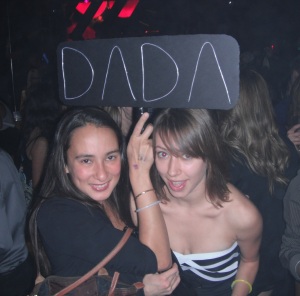 The last night we were back at the Encore for a Thanksgiving eve party at Surrender. Dada Life was disc jockeying, and I ended up dancing with the tallest German man I’ve ever met. He was staying at the MGM too, so we split a cab back, and Clio wanted to play more penny slots on our last night. We had a difficult time waking up a few hours later, and the morally conflicting decision whether or not I was ready to pick up our rental car at 11 am when I was potentially still inebriated. I was worried about going to Vegas and overeating, but with only 1 buffet in 3 days, we were more ready for an alcohol diet, so sobered up and headed to Utah and Arizona for a roadtrip. And, when we arrived in Mormon-ridden Utah to find out almost all the liquor licenses are bought out by the church, we knew we wouldn’t have a hard time keeping our diet.