Though Guernsey is closer to France than England, but not in the EU. Its also not technically part of Great Britain or the UK, but they use the pound with their own coins and different pictures on the bills. If I pass thru border control and can add pieces to my worldwide money collection, then hey, it’s a new country for me.

The south coast of Guernsey

The roads on Guernsey were built or horse carriages, and never really widened after the car was introduced. This made renting a new car and driving it on the wrong side of the ride extra difficult, since oncoming traffic was literally head on. The shores were rocky, the weather windy, and the skies a dramatic mix of clouds, sunshine and rain, so being outside never got boring. Once in a while there was a sandy stretch of beach and you were sure to find a dozen joggers and dog owners enjoying the space. We drove around counter clockwise, starting at the airport near St. Martin, to Pleinmont, then Vazon and Grandes Rocques and Bordeaux harbour before reaching the capital, St. Peter Port.

The pubs were in great supply, and even a handful of good restaurants, and the main attractions were a few lighthouses, port towns and an aquarium. Tourism is dead here in the winter, since many hotels shut down until the summer season and the ones that were open were only partly open. The island of Lihou was my favourite stop, and we arrived there during the only 1.5hr window when the ride was low enough to walk over. A handful of guests were doing the same to check into the only hotel (and only building) on the island, but a tractor carried their luggage in a rickety hay trailer since the rolley suitcases would have killed a few too many limpets and barnacles. 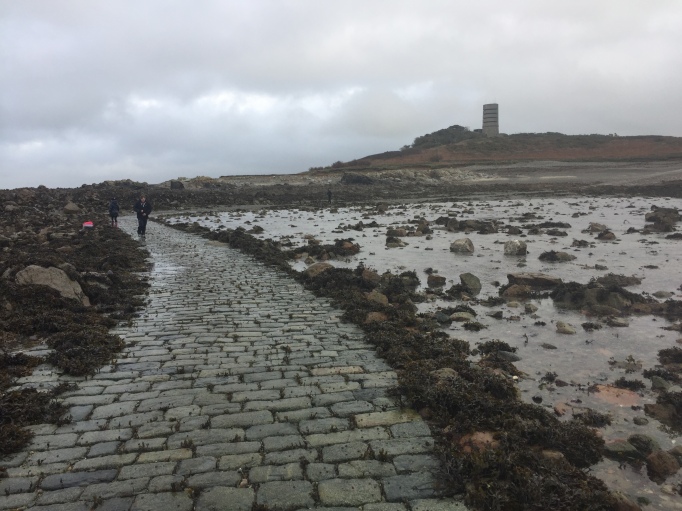 the underwater road to Lihou

The best hotel on the island was Ziggurat; it was a boutique hotel with cutely decorated rooms, a bar with views of the city to the sea, and a stone staircase leading straight into the center of downtown St. Peter Port. Breakfast was included, a hot meal with the feeling of being home cooked and served by a long lost aunty, and the eggs and sausage breakfast was a refreshing change from the seafood we’d been gorging on every other meal.

Katrin is currently traveling in Cordoba, Argentina, with horses galore, to the Caribbean for a bit of island hopping from the French and Dutch Antilles to Antigua & Barbuda.