I couldn’t believe our luck, but somehow we managed to hitchhike 530km from Lilongwe to Lusaka. Out of the 5 or 6 other guests at Croc Valley, two were being driven back to town in a private car and let us have the other two spaces, without accepting money for gas. On top of that, the German guy and Cambodian travelers were hoots of fun, and their driver became our local friend in Lusaka to show us around.

Lucy, Dandy Crazy, me and our local friend Al

He took us to a night club called Hollywood and they only sell bottles of alcohol as 2 for one. So our one bottle of bubbly had to be two, and three beers had to be six, and lo and behold I ended up being pulled on stage being dry-humped by some famous artist called Dandy crazy. We paid entrance to a guy called Danger Man, and I think he had something to do with it.

Me and Al with our double bubbles

We stayed at Lusaka backpackers, and their sister campsite, where I slept in my hammock with two Russian over landers as my self-proclaimed body guards. We took a bus to Livingstone, one of the least painful, comfortable coach buses so far, and spent the next few days blowing money.

Everything is an adventure or activity that costs either a lot to run, or they charge whatever they want because it’s a once in a lifetime opportunity. Actually visiting Victoria Falls is barely worth it this time of year, as the end of dry season (and dams upstream) leave almost no water flowing on the Zambian viewing side (but the Zim side is full blast). However, you can walk along the top of the falls closer to the Zim side and swim at the top of the falls for $75.  Some wouldn’t do it if they were paid $75, but it was totally worth it for me, even though I knew it was a rip off. 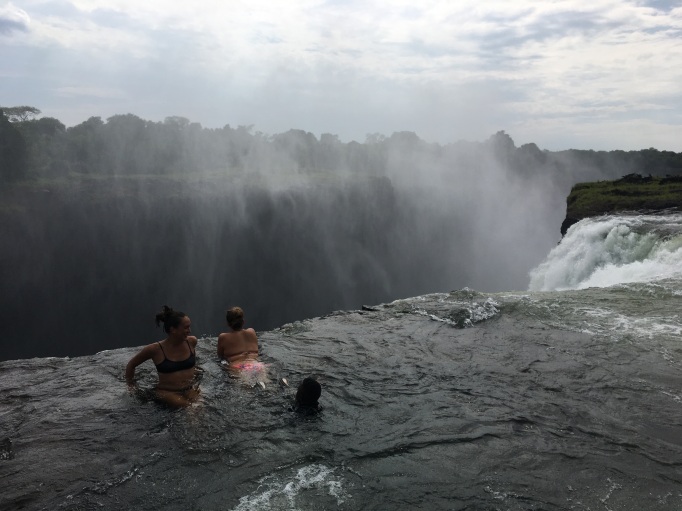 One the edge – swimming in the Devil’s Pool

Lucy bungee jumped off the Zam-Zim bridge, 111m of free falling and a minute or two of bobbing above the Zambezi River for a cool $160. We took a full day of river rafting on the Zambezi, which included one unrunable rapid. There we walked illegally on Zimbabwean soil, and made it thru the other 20+ rapids without ever flipping (other rafts weren’t so lucky).

Our last day was spent cruising on the Zambezi above the falls, where croc and hippo sightings are the norm. A local man had just been taken alive by a crocodile after fishing from the shore, so we made sure to keep our arms and legs well inside the boats. Our sunset cruise turned into an 80’s party where I was twice asked to change my clothes with a kayaker for money, and once just to see the worlds best kayaker Benny Mar wear sparkly gold hot pants for everyone’s amusement. That will be a sight (and person) hard to forget.