My blogs are typically about the places I visit but when I’m in Reykjavik I have to be a little more creative since I don’t really consider myself a tourist here. After being inspired by chef friends and Bocuse d’or, I thought it’d be fun to write about cuisine in Iceland, but there are a lot more qualified food critics out there, as well as tons of articles on Icelandic dining. Instead, I chose to do a little bar hopping, tasting some of the signature, house-specialty drinks those same restaurants or bars offer.

The rating scale we came up with was a likert-like letter scale from K to V. K stood for Kryptonite, V for VaVaVoom, and between the two extremes, Funky, Dousie, Quirky, Perky and Stupendous. The rating order is still not 100% certain, and for a while I was sure Kryptonite should be the best rating since I thought it meant explosively great; for those like me who don’t know what it is, its actually a fictitious element (the only one in the comic world) that can overcome Superman. 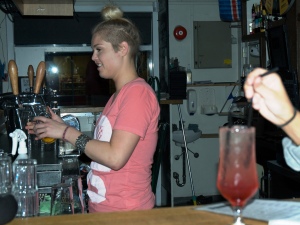 Annika and the Pole Vault

Their other house specialty drink is called Bench Press (whiskey, triple sec, orange liqueur, martini bianco, lemon and coke) and both are 1700kr. Id say stick to beer, both because its a sports bar and because Annika says she’s never drank it and rarely makes them.

Jói explained the bar doesn´t have a house specialty per se, but he (as the manager and award winning fastest bartender) makes up his own house drink. This particular drink was inspired by a customer who asked for a strawberry cocktail, probably because of the sunny Sunday afternoon enjoyedsitting outside on the patio. He also mentioned it changes from day to day, so this drink didn´t even have a name until after he made it. Extra points for coming up with a great name.

Bjarki on the Floor by Oddur

Drink: Bjarki on the Floor

Halfway through mixing this cocktail, Oddur realized he didnt have orange juice, so actually went out and bought some just to make this house specialty, known to knock guys named Bjarki down to the floor and a big favourite among the female staff at Dubliner.

We spent about an hour at Marija´s bar, keeping her from closing, picking her brain about the perfect way to mix a mojito. We also got a geography lesson, talked about all the specialty alcohols available from all over the world, and discussed salsa and tango dancing (which happens to pair very well with Mojitos on Thursday nights at Thorvaldsen)

all the citrus goodness getting mixed in

The bar and lounge at this downtown hotel doesn’t have a specific house drink, but Kris makes specialty drinks according to the tastes of his customers. His usual question is “do you like sweet or sour?”, and whips up an appropriate concoction according to their answer. This sour mix was his personal favourite. At Radisson Hotel Saga, the bartender Erol makes a drink called Delek, winner of the Finlandia cup a couple years ago, and is a mix of vodka, strawberries and soda. Also delicious.

Verdict: well, its more like a desert in a martini glass, and definitely the first martini I´ve ever had to eat… so I would say quirky. Also a little deadly, since its only a 6 oz drink and 3 of those ounces are untasteable vodka shots.

David and his Volcano

an assortment of passionate drinks

The theme of his bar was definitely passion, as he made two more passion fruit drinks called Chili Passion and Passion Caiprinhia. Those were thought up by the owner Águst, and the chili one was really spicy. Just before I left, he made me blind taste the drink he´ll be using at an upcoming bartending competition, and Im not sure what it was but it involved a lot of rhubarb and deliciousness. David explained at Fish Market they are always trying to make new drinks that challenge stereotypical taste profiles, and I would certainly agree they are accomplishing this goal with all their exotic fruits and creative toppings.

The best part about writing this article wasn’t actually the great drinks, but the accidental travel experience I felt like I got from chatting to all the bartenders. Only a couple were Icelandic, and the others represented Hungary, Ireland, Panama, Turkey and Serbia. I feel like I heard a lot of great stories and made some new friends, so hopefully one day I can invite them all for a drink made specially by me 🙂

Oh, and also, if you’re a bartender in Reykjavik reading this article and have a great drink I should try, I know an aspiring drink critic, so be in touch…