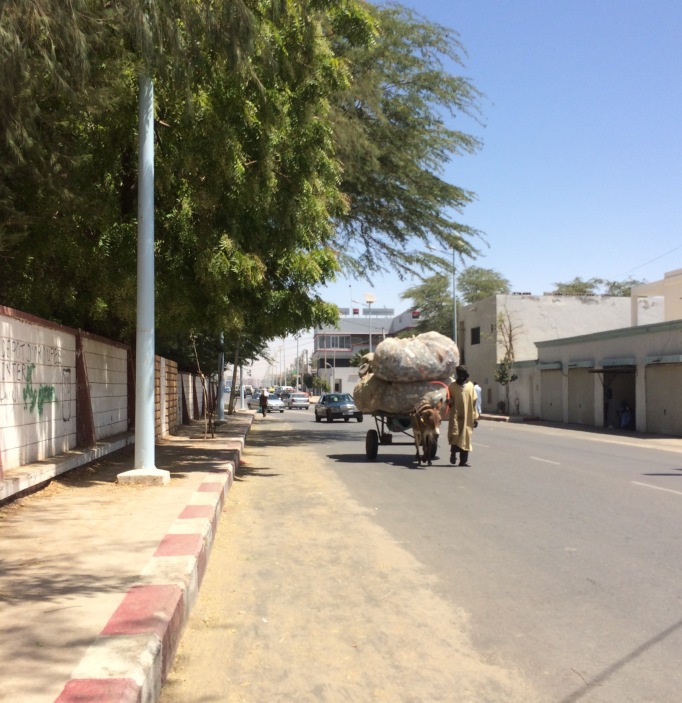 sandy streets of downtown, with overloaded donkey carriages for traffic

I tried to go to Mauritania in 2013 from Senegal, but that was a weird transition time when visas on arrival at land borders weren’t available. Just before that, you could show up, many by car overlanding the Sahara, and pay $20 or $30 for a visa. Shortly after that, the visa price increased to $130, and only available on arrival for flying passengers landing at Nouakchott. So we flew to Nouakchott, and waited in the line of half a dozen visa seekers for over an hour while one guy punched out visas for each of us that take 3-4 days at any embassy. I was actually surprised to see other travelers on the plane, despite the fact that every single seat on the plane was full, and I still don’t think they were ‘tourists’ per se. 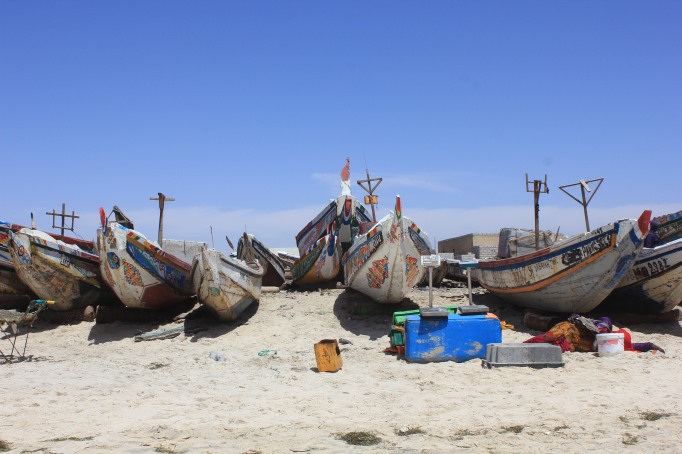 a beach full of boats

Mauritania is famous for a few specific things. It has these crazy sand storms, where walls of sand from the Sahara surge in and cover everything and everyone in dust and darkness. It only lasts for a few minutes, but if you’re caught outside, each minute is slower than you can bear as you struggle to open your eyes or mouth or nostrils to see or breathe. Mauritania is also famous for having one of, if not the longest train in the world. There’s an iron ore train that can sometimes reach 3 km in length, and travels hundreds of kilometers from Zouerate and Choum to the sea. 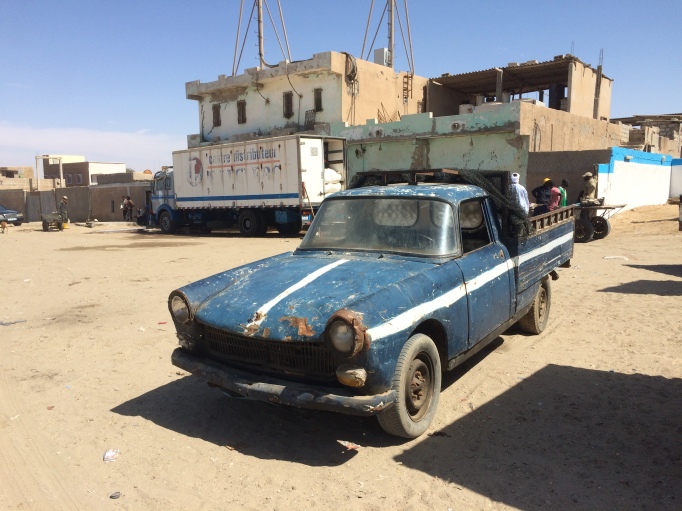 Nouakchott, Mauritania’s sleepy capital, is on the coast but seems to bridge one faster into the Sahara than the sea. Although the other famous thing about Mauritania is Nouakchott’s Fisherman port, which is ironically not much of a ‘port.’ Its a never-sending stretch of beach, with wooden fishing boats parked side by side with barely enough space between each stern to pass by. Their are big ones and small ones, all with engines much to little, and painted all colours of the rainbow. They’re pushed out to sea and dragged back in manually every single day, in a very chaotic but ritualistic way. Watching the men wearing rain gear and rubber boots never made sense as they all came in from each job emptying the insides of their pants and boots of water, and wading out to sea trying to push a 3 tonne boat must be more difficult when you’re that waterlogged. 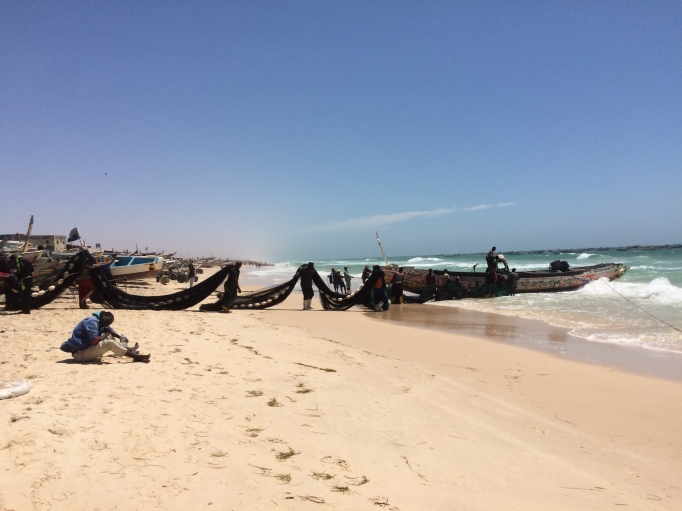 In Nouakchott we stayed at a new hotel every night. We tried everything from ‘western’ hotel to roof-top camping, a mix of hostels and guesthouses, auberges and beds and breakfasts. My favourite was Auberge Diaguili, an unmarked house full of boutique-style rooms and where the penthouse suite costs the same as any other room. Auberge Menata was the most ‘traveler’ friendly, and we finally met some other tourists, or ‘travelers’ rather. One was a Spanish guy who had home made a didgeridoo out of plastic water bottles, sawdust and glue – incredible! 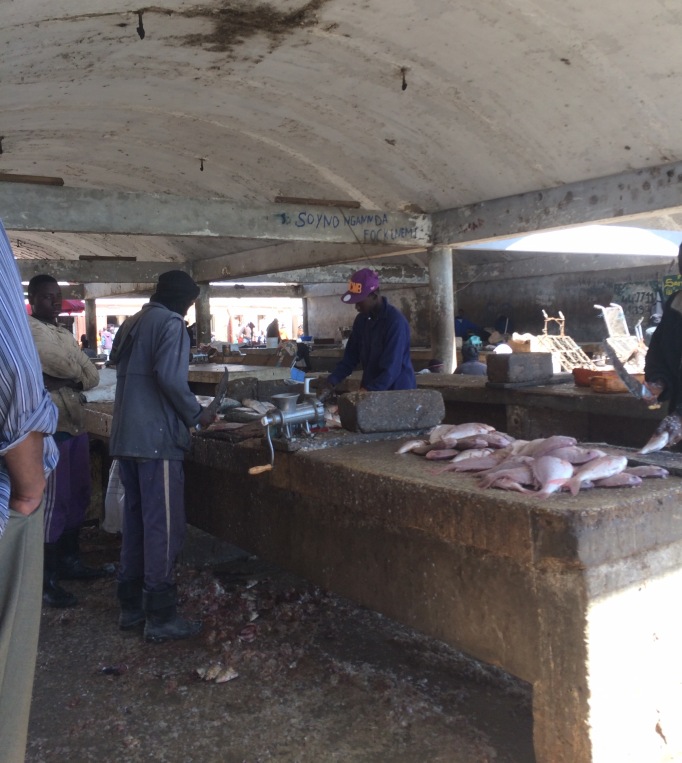 Since it was kind of a foody trip in upcoming Morocco, we began tasting a few Mauritanian dishes. There’s an interesting mix of Arabic, Senegalese and Moroccan influences, but then again I never know if the chicken came before the egg or vice versa. After visiting the fish market and seeing piles of dead, rotting fish that actually made you choke, and the younger guys running after the food transporters and ice trucks to pick up all the fish that fell to resell later, seafood didn’t entice. The Lebanese restaurant Le Menara was amazing (stick with appetizers) and Joao’s Casa Portugesa had the best, basic grilled veggies and special ‘tea’ one could ask for. Alcohol was illegal in all of Mauritania, but we had accidentally smuggled in some wine and vodka and didn’t know until after the fact, which caused some awwkard check-out moments when the garbage can had an empty bottle. 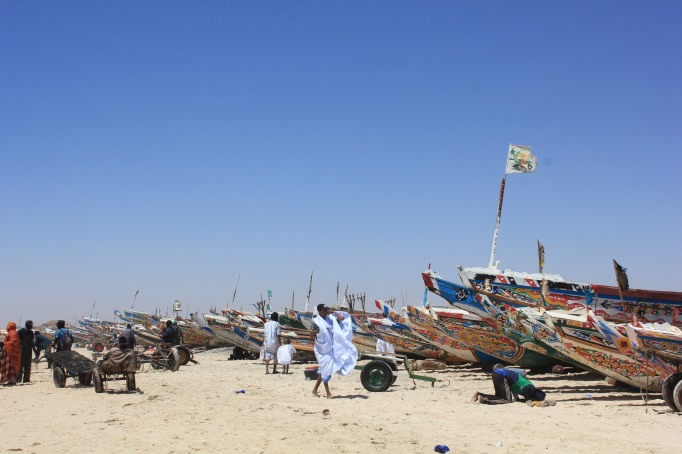 the Mauritanians, the fishing boats, and one praying muslim at the Port de Peche, Nouakchott