Iceland has been competing in the prestigious cooking competition Bocuse d’or since 1999. For chefs, this is like making it to the culinary Olympics. Iceland has always qualified in the regional Bocuse d’or Europe to compete in the worldwide Bocuse d’or, and never placed lower than the top 9 countries in each competition. In 2001, chef Hakon Mar was the first to land on the podium, with a third place Bronze, an extraordinary accomplishment for a tiny nation, often overlooked as a foody place, like Iceland.

Since then, a lot has changed. Scandinavian countries have become fashionable leaders in Europe’s culinary scene, and Iceland has finally become a world-renowned tourist destination, not only for nature tourism, but for also for gourmandes. The competition has also changed, becoming much bigger, better and far more complicated to win each year. The level of cooking in 2017 would have shunned the first podium winners with their abilities in 1987.

It takes one year to prepare for the regional competition (there are 3 regions: Latin America, Europe, and Asia), and another year for the top qualifiers (plus a few additional wild card countries) to compete at the biennial Bocuse d’or Concours Mondial in Lyon. Its named after Paul Bocuse, one of France’s most famous chefs and a leader in fine dining history. 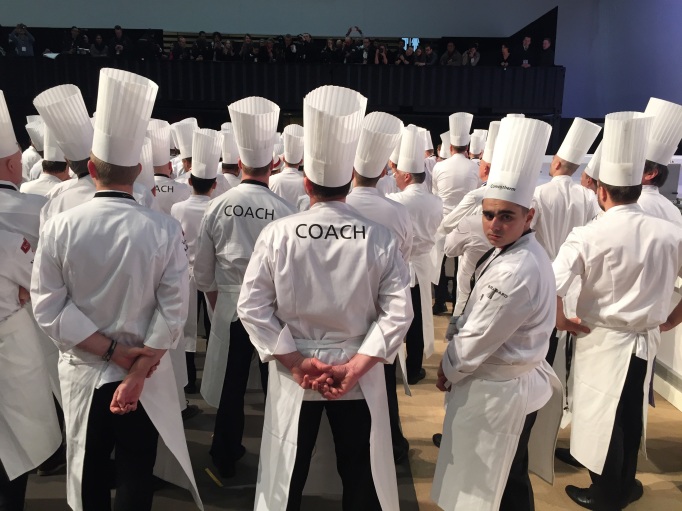 The French commis looking back

This year, Iceland had over 150 supporters follow the candidat Viktor Orn to Lyon. After winning 5th place in the Bocuse Europe competition, and having 4 other previous candidates supporting and trainng him, he also had an amazing coach, Sigurdur Helgason, and a commis that would have definitely won Best Commis if they hadn’t landed on the podium.

The French team had the best commis, and European winner Hungary placed 4th just after Iceland. In second place was Norway, and for the first time ever, the USA won gold. All the winners went to Paul Bocuse’s restaurant for breakfast after the competition and met the now 91 year old legend himself. Viktor’s name has been permanently engraved in a shiny plaque, a walk of fame for all the winners of Bocuse d’or since 1987. Now with 2 Icelanders having mastered the competition, its only up from here. Despite being a nation of only 300,000 with a handful of good restaurants, its amazing to think that we could easily be shaping the next silver or gold Bocuse d’or candidate. Stay tuned til 2019!