I´ve been to LA a handful of times, and the city is always as big and intimidating as the last time. Within LA county, there´s so many neighbourhoods to visit and experience, and getting between them is hell, especially with the added charm of LA traffic.

My week was based around visiting some familiar faces. I spent my first two nights in Venice, hanging out with Jake and his pregnant girlfriend and co. I met Jake in Iceland years ago when he was working on a film with Baltasar Kormakur, and we met up in LA once since. I met his friend Peter Harding again, a documentary film maker, for cappuccinos on the beach. Its some of the most decent coffee I´ve ever had in America, from a café called Menottis, and in the evening they´ve got live jazz downstairs at Townhouse to jive to. 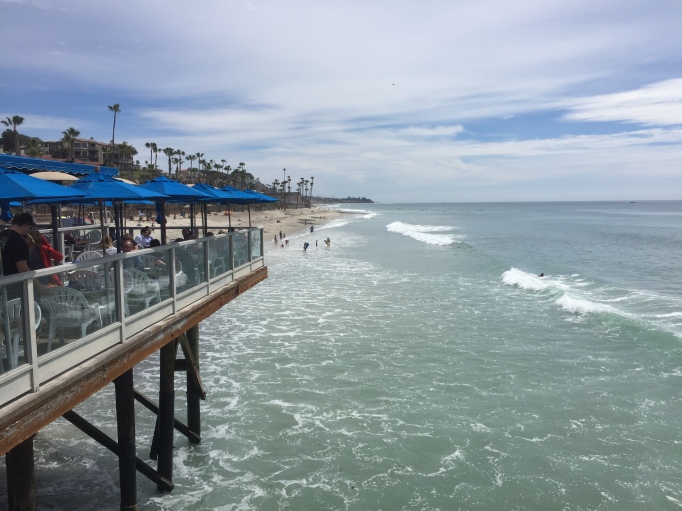 My friend Luke, who I know through a mutual UBC friend, works in music and came to Iceland for Airwaves in 2013, trading an all-access VIP pass for rights to my couch. That’s a solid start to any friendship. This time around I got to surf his couch, with his dog that just got diagnosed with terminal testicular cancer. It was a bummer, so finding our temporary happy place watching Superorganism at the Echo where he books shows was in order. A friend from the WFR course also joined, and we after partied with a guy whose name I cant remember, but his look was unforgettable: he had visibly time traveled to the present from the 1960´s.

the Surfliner, the train with a view between LA and the OC

Conrad, an American raised in Iceland that I met tango dancing in San Francisco nearly ten years ago lives in San Celemente. I took the train up through Orange County after finally getting my first glimpse of real Californian sunshine. People were out surfing, jogging in their Lululemon get-ups head to toe, and I finally got my first tan of the year. Conrad and I went tango dancing in LA, and drove back to San Celemente late that night with the top down on his BMW convertible, with the heat and music blasting. I cant think of a better way to stargaze.

I met a couple in Reykjavik last autumn who lived in Pasadena, and I met the woman for happy hour in North Hollywood. She´s a dog rescuer by day and got bit by one of her rescue animals, but even with a bandaged hand and her private car full of dogs, she glowed.

The reunion I cherished the most was meeting Moira, 12 years after we circumnavigated the world together on with Semester at Sea. She was happily married, living in Hollywood with the perfect husband and two cuddly dogs, in a picture-perfect home with their one and a half year old bundle of joy named Dempsey. I can´t believe how its possible to still relate to one another, and keep up with these people, half way around the world, from the many walks in life we´ve had to where we are now, all in different stages. I definitely have to thank social media for allowing it, but your people are always your people, despite how much or quickly the time goes by.