I wasn’t sure if I’d make it to Ghana. All the Ghanaian embassies I had talked to so far (in Mali, Burkina Faso, Benin and Togo) had refused me since I wasn’t a resident of any of their countries, but no one seemed to consider the fact that there is no Ghanaian embassy in my resident country. They hadn’t even heard of Iceland, so I tried to convince them it was part of Togo, but that didn’t work. Then I told them that the closest embassies to Reykjavik, in London or Copenhagen, had refused me for the same reason, so somebody had to eventually issue the visa, or else the conclusion would be that no Icelanders could visit Ghana.

my guide in the butterly hills of Togo

After being rejected in Lomé, I went to the butterfly forests of Kpalimé, 150 km north. I was there to go chasing waterfalls and lots of colourful butterflies, but the dry season kind of killed the waterfall chase. I hired a guy to take me around the winding hills and forests one day, and I think he had more fun than I did.

After frolicking around Togo, I tried to casually cross at the local border of Ho, just 25 mins away from Kpalimé. It took me a couple motorcycle rides, along winding dirt roads that seemed to lead to nowhere, but eventually i reached the exit post of Togo. I convinced the officers there not to stamp me out of the country, since I wasnt sure if I´d get into Ghana, 2 km away past some no-mans land. I reached the smiley, english speaking Ghanaian border post, only to make 4 new friends that couldnt help me at all. They said they didnt issue visas and couldnt let me in, since I´d definitely not get back out of Ghana  without alot of hassle.

So I took the windy dirt road back to Kpalimé, and another hot stuffy bus 150km south to Lomé, and went straight to the border crossing there. I reached just 30 mins before it closed, and had to again convince the Togolese side not to stamp me out. I walked the few meters into Ghana, and the first officer I met immediately started flirting with me. It was a good start, atleast I thought so, so I stuck to him until he took me to his boss. Then that guy, holed up in an office with another powerful official, started letting on that they “could issue me a visa, but what incentive could I give?” They circled me with indirect questions, begging for a fat bribe, and finally said the visa would cost $150, or 120 Euros, and anything extra would help facilitate the process. I played stupid and sweet, thanking them for being so helpful, and that that exact price was just perfect. Half an hour later, they reluctantly gave me back my passport, still hinting at some sort of cash-value thank-you, but I already knew I had paid 5 times more the cost of a tourist visa, and I only got a hand-scribbled stamp valid for 1 week. 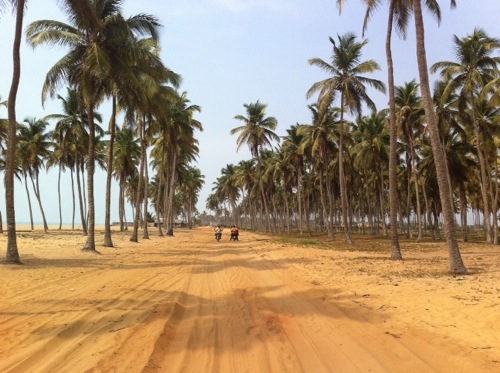 Benin and Togo kind of sounds like a couple of Caribbean islands, but they’re two skinny countries sandwiched between Nigeria and Ghana. The influence of Christianity and English have seeped into these French-speaking countries, and drinks like Guinness and Milo are just as common here as in other former British colonies. They were important ports in the slave trade days, and the origin of Vodoo religion lies somewhere between these countries.

I left Burkina Faso on a 15 hour bus from Ouaga to Cotonou, but 30 hours later I finally arrived the following morning. The bus had numerous reasons for being delayed, from the presidents presence blocking one road to waiting for armed military to board our bus and take the other road. I expected it to be a small-town kind of place, especially since Porto-Novo is the capital, but Cotonou reminded me of Phnom-Phen with all the hundreds of moto-taxis filling the large roads. I had couchsurf hosts in Fidjerosse, the sandy-lane suburbs west of the airport. One was a Dutch guy living with his Togolese wife, the other was a French guy living with his Cuban girlfriend. They’re homes were warm and inviting after the long journey, and I relaxed on the beach where I found some more ponies to ride.

The beach in Benin is beautiful, the entire coast-line a stretch of yellow sand, palm trees and fishermen (minus the huge port in Cotonou). There is a famous road called the Route des pêches, a 50km sandy track where only motorcycles and 4×4’s pass, and I hitchhiked it all the way to Togo. I stopped in Ouidah, the old slave port famous for its voodoo culture, and tried to make sense of all the colorful, cartoony statues that mark their superstitions and beliefs. There I picked up my last hitch-hike bike, whose driver didn’t speak French but was nevertheless road tripping through Benin to Ghana. I forget his name, but I’ll never forget his smiling face – he was a tall and lanky, gay comedian from Sierra Leone wearing a purple dress and long, painted nails to match. TIA, hey? 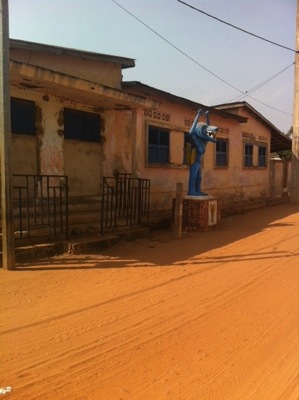