I’ve been working with Backroads for a couple of summers now, and this was my second winter. It’s been a good winter – snow storms, minus 10 degrees and plenty of northern lights. The day light is short, with sunrise after 11 and sunset before 4, so there’s a small window of opportunity to be active outside. We’re meant to hike, snowshoe, glacier walk or horseback ride, and the weather doesn’t always cooperate. But when it does, its a winter wonderland out here. 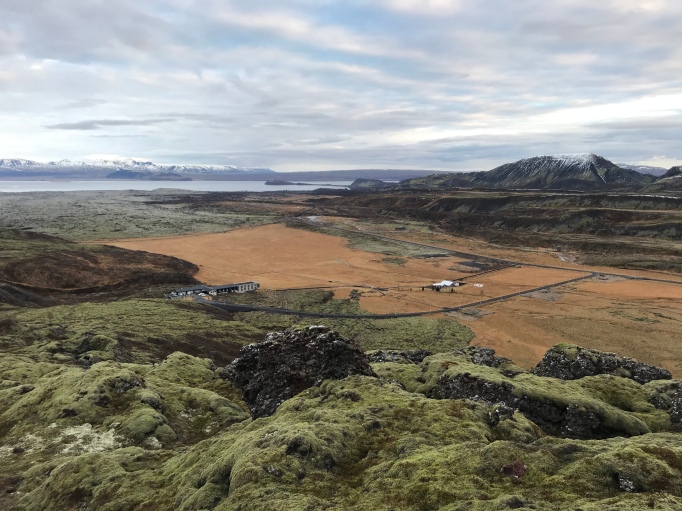 I had a week of trip preparation, where me and the trip expert practiced all the hikes and visited all of our vendors. Hotels, restaurants and farms took us in with open arms and we had luck with weather almost every day. Once the first trip started, we lucked out with northern lights 5 out of 5 nights, and the trip couldn’t have gone better. 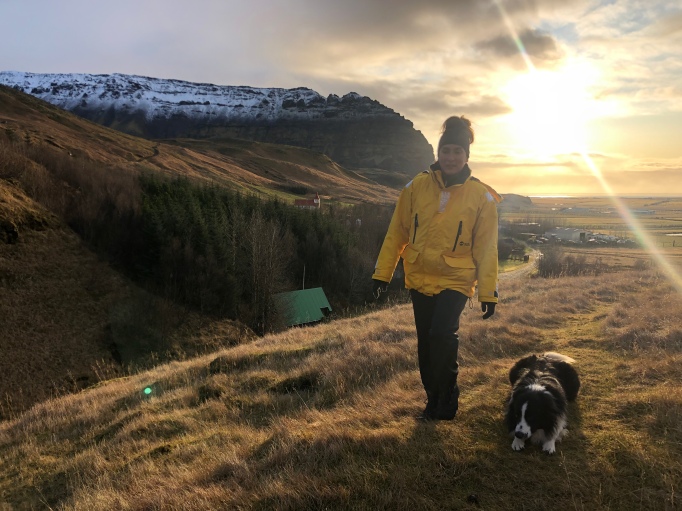 The second trip ran over the worst storm Iceland has seen in years, with power being cut off across the north of Iceland, and up to 4 meters of snow burying horses alive. We were on a small spit of the south coast where the only open road in the whole country was a 10km stretch of highway 1 exactly around us. It was incredible to be able to stick to the plan, hiking and glacier walking despite the rest of the country being on lock down, and our only inconvenience was staying an extra night at Hotel Ranga since we couldn’t get to Umi Hotel.

a nearly completely frozen Oxarafoss, a special site even for Icelander’s

The third trip was over New Years, and we rang in the New Year together at Hotel Ranga with our group and the staff that have become more and more like family after so many nights at the hotel. There were two guests with birthdays on January 1st, so there was plenty to celebrate, and we saw Northern Lights in the morning before sunrise on our way onto Solheimajokull.

The next trip won’t be until March and April, when the daylight hours are triple what they have been so far. It’s better for flexibility and certainly makes driving thru snowstorms easier, but there’s a certain charm in visiting Iceland in its darkest hours, and the feedback from guests has always been rewarding – what a magical country we live in to be able to enjoy it in the midst of horrible winter storms and still come home smiling.

New Years eve, and the few days leading up to it, are very explosive, literally. Icelanders buy hundreds and hundreds of tons of fireworks and explode them downtown, in backyards, harbours, farms, you name it. Reykjavik is the only city in the world where I can actually hear midnight coming, as the fireworks get more and more intense around Hallgrimskirkja, the loudest climax is the moment when the New Year has arrived. 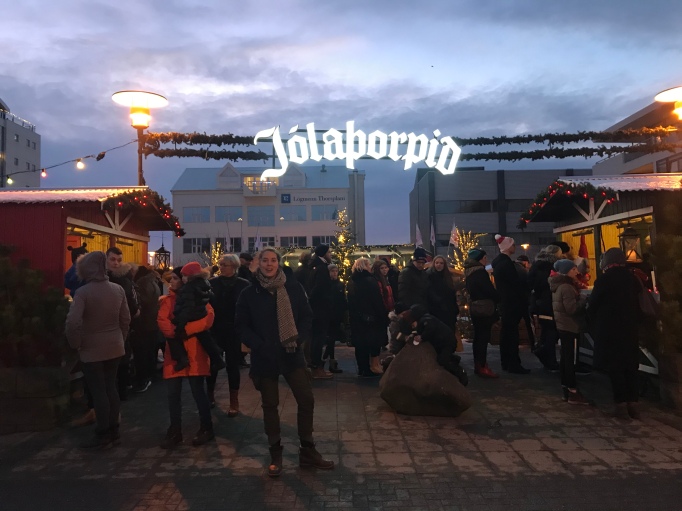 The Christmas Market in Hafnafjordur

With 26 days of Christmas, there are a lot of traditions that Icelandic people keep up to fill the dark winter season. There’s even a small Christmas Market ´Jólaþorpið´started in Hafnafjordur, and free ice skating in Ingolfstorg downtown for all the days in December. Then of course there are the famous, or infamous, Yule lads, the 13 Christmas elves who each have a special, mischievous role to play. There´s the hungry ones: Sausage Stealer, Skyr Gobbler, Pot Scraper, Bowl Licker, Meat Hook, who loves smoked lamb, and Stubby, who likes eating pan crusts.

There´s the creepy ones, Sheep harassing Sheep-Cote-Clod, Door Sniffer and the Window Peeper. Then there’s the annoying ones: the noisy Door Slammer, Gully Gawk who likes to jump out and scare people, and Candle Sneaker, who’s also hungry because they’re used to stealing candles made of animal fat and eating them.

These fine examples of Icelandic folklore are the sons of a large, ugly, child-eating troll named Gryla, and her black cat eats Children who don’t receive any new clothes for Christmas. The Yule lads are not all bad – they bring down a present to put in your shoe, one by one, for the 13 days leading up to Christmas, unless you misbehave – then you get a potato or a piece of coal. Then 13 days after Christmas, the Yule lads return back to Gryla in her mountain, and the last day of Christmas is Jan 6, but its only a few weeks to wait until Thorrablot, Icelands other, rather unappealing, winter tradition.

Thorrablot used to be a pagan festival, dedicated to pagan gods in the fourth month of winter, previously known as Thorri. It’s basically a midwinter party (end-Jan to mid Feb in the modern day calendar) dedicated to eating sour and fermented foods, the same ram testicles, sheep head, rotten shark, liver and blood sausages as the vikings ate before the modernisation or Christianisation of Iceland. Its also a drunken time, when farmers and fishermen and city folk alike gather in huge groups (a dinner for hundreds of people sometimes), organising with the next county or community to make sure they don’t hold the festival on the same night, so that everyone can go to more Thorrablots and drink enough beer and brennivin to wash all the sour food down and hangover away. Sounds like a blast, right?

My favourite Þorrablóts are happening around Feb 1st in the north of Iceland, be sure to check out Varmahlíð or Hunaver´s schedule, or just search Thorrablot in Facebook events to be sure to find the one closest to you. Or, if sour food isn´t for you, there´s always hottubs and the outdoor bathing culture we all love and need to get us through a long Icelandic winter.

I spent a total of €0.60 in 3 days in Ibiza. 35 cents for a bottle of carbonated water, and 25 cents for a bottle of mineral water. I couchsurfed with a 53 year old local guy and his Peruvian wife, but could only understand 50% of what they said, which was still in a broken form of Spanglish where no tense was correctly used, ‘want’ and ‘have’ were the same word, everything happened in the first person, all verbs had Spanish endings, and he confused words like ´time´and ´weather.´ If he asked ´you have water?’ or ‘did you check the time’ I wouldn’t know if I should answer no or yes to get more water, or talk about the clock or the rain. But I was taken care of from beginning to end and everything in between, with meals, drinks, and movies offered to an endless supply. I got picked up at the ferry terminal, and for the first time in 5 days, it was walking about weather again. So we explored Ibiza town and the old city, the churches, the city beach, and picnicked on the fortress walls. On the way to his place in San Antoni de Portmany, we stopped at a stone garden, a place only imaginable on this island so commonly loved by the hippy trail.

San Antoni is a small city, but still half empty and shut down like every other village. One out of ten restaurants or cafes is open, and all bars and discos were closed for the season. Its only surprising because the season is only from May to September, so its hard to imagine how people can survive off only 5 months of business. All the hotels, sea-side buildings and boats just sit around for the other 7 months costing money and not making a penny, and the most touristic thing I did was visit about 5 or 10 free churches in the countryside villages (more than half of them were open!).

The street art in Ibiza was phenomenal. The line between graffiti and murals was indistinguishable, and both equally intriguing, but of course the occasional penis or ‘fuck’ was spray painted in inappropriate places. Art galleries and cemeteries were just as much information to process visually, while the rolling countryside of vineyards and almond, orange, olive and fig trees seemed endless. It was surprising how green everything was, despite the cold, but in fact the rainy wintery season makes it seem like an Icelandic summer, and in their dry summers, everything dies and greenery turns yellow and gray like an Icelandic winter. 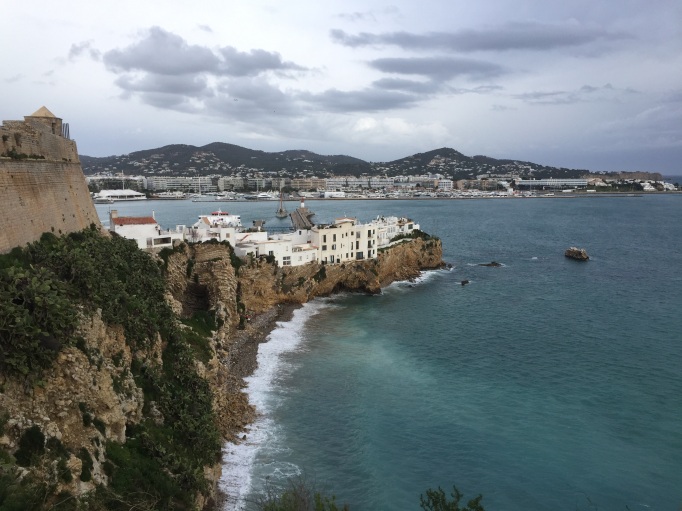 If you make it to Saint Gertrudis, definitely go to Bar Costa. One of the only cafes open, it was packed, with wooden fires burning inside, and an art gallery from floor to ceiling of melancholic paintings. It was the first and only building I visited that was warm, since no one has central heating. There was no difference from leaving the house and walking outside or returning home, the temperature remained the same. I could literally see my breath when I exhaled inside my room, and the most mundane tasks became extremely uncomfortable, like having to sit on an ice cold porcelain toilet just to pee.

one of the many churches in a tiny village between beachtowns

I enjoyed a roadtrip around the southwest beaches and ‘calas’ despite the storm, and finally toughed it up enough to accept the weather and dress in 3 layers of all the clothes I packed. It wasn’t that cold, maybe 10°c, but the humidity, wind and wet feet sent a chill thruout your body you could never shake since it never went away. Atleast it didnt hail or snow in Ibizia, and now that I’ve seen it all alone in off-season, I´m looking forward to returning when the island returns from hibernation and the sun shines again on the thousands of visiting (and local) faces. 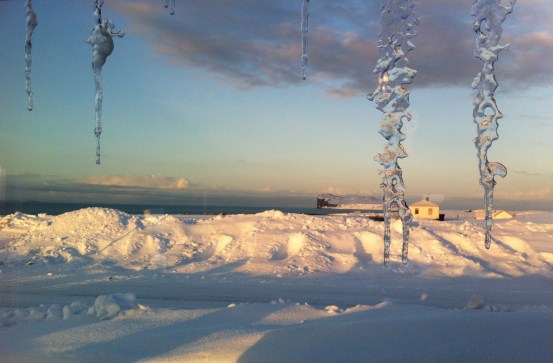 the icy view from inside the summerhouse… er, winterhouse rather