Iceland only formed their first men´s football association in 1947, three years after becoming independent from Denmark. Since then, a few talented souls have made careers as players abroad. The best known footballers were arguably Gylfi Sigurdsson and Eidur Gudjohnsen until 2018, but now a handful of faces from the national team have become international prodigies. Birkir Bjarnason has become the familiar face of 66°N; Rurik Gislasson has become a heart throb world wide, loved even by the enemy when Iceland tied Argentina in their first World Cup game; and Hannes Halldorsson the goalie definitely deserves MVP for that first game where Messi just coulnd’t get past him. Now, they have rewritten football history, becoming the smallest country to ever qualify for the world cup, and risen from being ranked 133rd to 22nd within FIFIA. 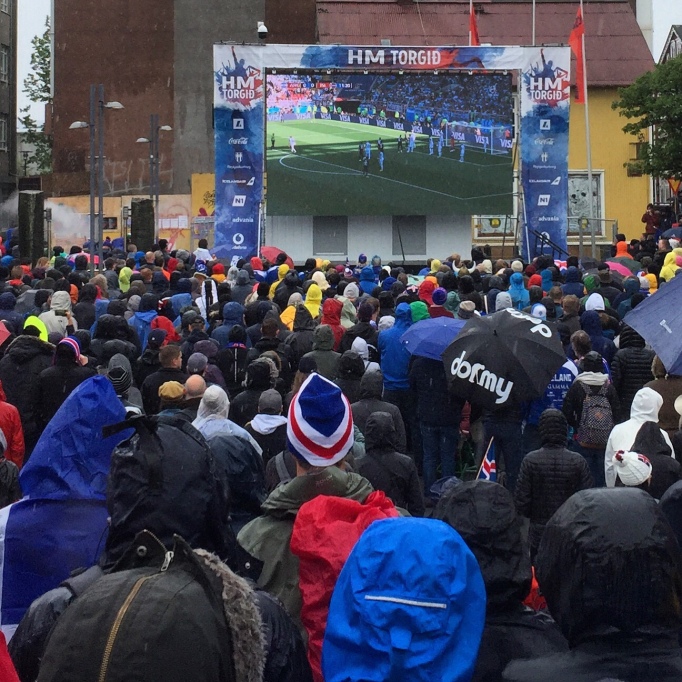 The World Cup hype started two years ago during the Euro 2016 qualification. We started by playing Portugal, Hungary and Austria. We tied Portugal and Hungary 1-1, but beat Austria 2-1 to make it into the quarterfinals. The newscaster reporting on the Austria game nearly lost hist sanity (and his voice) and this youtube video is definitely worth listening to: it gives you a glimpse of what every Icelander was feeling in that moment. Then we beat England 2-1, (that video is also a must see) another incredible victory, and France finally put out our unstoppable fire with a humbling 5-2 loss.

The World Cup in Russia 2018 crept up so slowly, but the hype never faded, and the planning and suspense was constant. 66°N designed special clothing for the games and Icelandair painted the plane into an Icelandic Flag that flew the team over. Both of our national airline carries made special schedules and flew direct routes to each one of the first three games. And a sea of Icelandic-blue fans flocked to the various stadiums in Russia to watch the games live, sing in the stands, and clap and cheer the ‘HÚH!’

The games started well: June 16 we tied Argentina 1-1, in an impressive display of defence. June 22 we faced Nigeria, perhaps with a bit too much offensive, underestimating their plans of kicking our butts 2-0. The Croatia game on June 26 was powerful, in fact, unbearable to watch, because we really had it. We played so well, and we had the chance to edge ourselves into the quarter finals if we had just sunk one of those goal attempts. It wasn´t until the last seconds of the game that we believed we weren´t going forward. However, watching Croatia make it to the final and knowing how we played them gives us all the more reason to be proud of Team Iceland and their first performance at the World Cup.

For the sake of Reykjavik´s very few reasons to congregate outside in the city centres and the prideful, social unity of a country over one sport we witnessed this summer, I sincerely hope we make it to every Euro qualifier AND world cup in the future. Thanks to the team for giving us such incredible representation, and even more reasons for tourists to keep flooding our talented little country.