I just had the annoying but strangely flattering problem that two of my old blogs had to be deleted, and a few others censored, because of some unnamed security issues. Now, I feel comparatively bound when trying to write a blog post on my vacation in the Dominican Republic, due to 3 reasons. 1.) I have almost no stories or photos that are not incredibly incriminating for the amount of partying, dancing, and drinking we did there 2.) All our beaching and evening attire, though modest by local standards, caused an upheaval of overbearing and slightly unwelcomed attention, all of which I’ll blame on Ursula’s fair complexion and golden locks, and 3.) Our last three days (subsequently the highlight of our trip) were spent in the clutches of 8 or 9 Very Important American’s whose names or jobs I cannot disclose.

Me and the blondie, sporting her new bikini compliments of AA

But, I’ll try to divulge what I can. First, let me begin by berating American Airlines. We arrived on Saturday morning for our flight from JFK to Port-Au-Prince, Haiti, with confirmed reservations and assigned seats; 5 mins before boarding commenced, a distasteful Russian attendant called our names over the PA, and when we walked up to the counter, took both our boarding passes, ripped them into 4 pieces, and with the most devilish smile exclaimed “You’re NOT going to Haiti.” Our first response was that she must be joking, with that shit-eating grin on her face. But, she insisted she wasn’t. Our second response was it must be our fault, something we did, some bomb someone snuck into our one checked bag. But, that wasn’t it either. 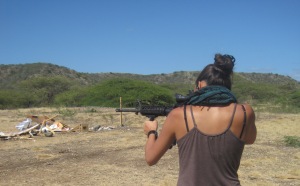 we did NOT have this rifle in our luggage

American Air had taken advantage of aviation laws which allow them to oversell flights by 25%, and when noone volunteered to fly later, kicked people off arbitrarily. Well, they had a method which made no sense, basically that the last people to check in would be the first to go. But since we were confirmed passengers, Ursula’s backpack had already been loaded on the plane and Basia, the abhorrent airline representative, explained it would not come off so we would have to meet the bag in Haiti the following day when the next flight departed. Although we had a flight to Haiti and a couple days of plans in the capital, our final destination was Santo Domingo, DR, where we had our return flight home. When Basia learned this, she promised she would isntead fly us out 2 hrs later on a direct flight to Santo Domingo, forcing us to abandon all our plans for Haiti. Then she learned she wasn’t allowed to do so, conveniently right after the Haiti plane departed, and started trying to offer us a cab back to NYC.

After a $600 travel voucher, $10 for breakfast, yelling at 2 employees and the some obnoxious supervisor named Treadwell, we finally had confirmed seats to DR within the hour (also overbooked, so I wonder who they kicked off for our sake – sorry!), but remained bagless and planless in Santo Domingo. We were promised 3 different delivery times and locations but only got the bag back 3 days later after it was flown back to Miami and possibly New York before returning to Hispaniola, even though there’s a daily flight direct between Port-au-Prince and Santo Domingo. Airline inefficiency at its best. We took appropriate action to buy ourselves new wardrobes and bikini’s, on American’s tab, and forgot all about the hassle after the bag was finally found since we started to wonder if it’d ever turn up. 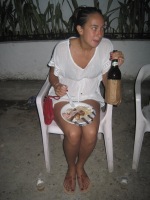 Night after night we indulged in Presidente or Bohemian 1L Beer, and the local favourite rum option, Ron Brugal. We got our latin dance on, mostly bachata and meringue, and continuously resisted the fabulously forward, flirtatious men. (NB: Ladies, if you ever have any self-esteem issues, all you need is a week in the DR and you’ll never feel more beautiful!) The trip was very inexpensive, and locals were very hospitable; we stayed in cheap hotels or “pensions,” could not get the chance to pay for a single drink, and were offered boyfriends or “I love you’s” by a few guys every day.

Our real highlight was the last 3 days, spent on the southwest coast at a non-descript, 9 bedroom mansion and a resort-hotel penthouse. My birthday fell in the middle of those 3 days, and I certainly had one of my most memorable birthday celebrations – top three gifts included a bottle of greygoose, 4 bouquets of red roses, and about 20 bullet casings from an M4 I got to shoot off. One of the men from our entourage had a birthday the day before mine, so he generously shared his birthday bottle of Johnny Walker Black, a few birthday dances, and a midnight plunge, fully clothed, into the sea with all his friends throwing me and Urusla around like ragdolls as we failed to fightback. All the American guys and Ursula together made me feel so special that I didn’t even get a chance to wish I was anywhere else for my birthday.We got set up, fed, and driven around the whole time together, all the way to the airport on our last morning, and I can’t imagine a more perfect ending to our vacation. It just goes to show that the less planning we did, the more open we were for accidental miracles falling in our laps and having our vacation unfold like a fairytale.