I spent 4 days in Serbia, and when I say Serbia, what I really mean is under an umbrella in Belgrade. It was raining when I arrived at 6:30 am,  and I hadn’t expected to arrive so early. I took an overnight train from Hungary, which left on time and arrived on time, despite the slow border crossing. My couchsurf host hadn’t expected me on time either, so i stood shivering under cover til he found me, took me home, and tucked me in, where I finally got some dry, warm, rest. I had left Hungary in a storm, but thought I had left the bad weather, and a small ray of sunshine even broke through that afternoon. We drank dark beers in the sun on the Danube river bank, and then retreated to teenage public drinking in a grassy park with a Canadian rockstar named Eric (who I also found on couchsurfing). But, since all good things must come to an end, it then rained constantly for nearly 3 days. And I don’t just mean some slight sprinkling, Vancouver-grey kinda rain – I mean torrential downpour, streets-turned-into-rivers kinda rain. 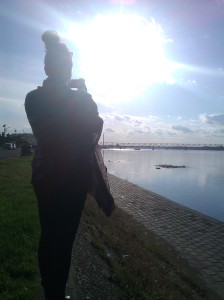 the only sun I saw in Serbia

I spent an entire day couped up in my couchsurfers apartment, shivering only from the sound of the wind and rain outside. I tried to leave the house, but within 100 m of the bus stop, my umbrella had inverted, wind was blowing at me sideways, and I couldn’t see well enough past the rain being thrown at my face to avoid the buddles, so the socks inside my waterproof boots were also wet. I returned back home, defeated and soaked. I stayed huddled and cuddled inside, as the walls started station – the leaks through the roof had started to seep in and drip down the stairs. I had tickets to the opera, one of the most preformed operas in history but still I’d never seen it, so I had to make it. The Serbian Opera company was performing L’elisir d’amore, and the tiny National theatre seemed like the perfect place to see it. It was performed in Italian and dubbed in Cyrillic Serbian, so I didn’t understand much, but for less than 2 euros for a 2nd balcony seat, I had no complaints. It was a splendid, entertaining evening, and I even indulged in a seat for my couchsurf host, who could only sit in it for half of one act.

The next night we watched the Serbian Philharmonic preform Bach’s Mass in B minor. It was also staged at a small, intimate, theatre, but not as showy or comfortable. The seat rows weren’t spaced far enough apart for even me to sit straight, let alone your average guy, and they kept all the lights on in the hall. It may have been because the Serbian Radio and TV was broadcasting it, but then the symphony and choir made lots of little mistakes. People walked in and out of the performance without any door locks, and again the seats we paid 3 euros for were actually worth double that, since there was noone sitting in the front-n-center expensive seats. But wearing informal clothes or wet jeans were a perfect occasion to seek shelter from the storm, so it makes sense the kind of crowd that fills a room of  €3-6 seats. The guy who sold me the opera tickets smoked a cigarette while he did it, coat check was free at the opera and the symphony, and the drinks that you could buy cost only  €1 or  €2, so in many ways, the music and arts scene was 10 years behind the rest of Europe. But, in other ways, Belgrade was very forward compared to the rest of Europe. The conductor for the opera’s orchestra was female, and the crowd attending both shows was much younger than the average age of 60 (which it was in Paris).

waiting for a bus in the rain

We took home one of the very tech-forward buses (which no-one likes to pay for in Belgrade) but they do have amazing, frequent, 24 hour service and a no-touch pay system with an electronic announcement system (very helpful if you don’t know where you’re going or coming from). The rain kept falling, and eventually the roads started to close, from flooding and landslides, so long-distance buses stopped running and I considered a new life in Belgrade… not knowing when I’d leave. Buses to Bosnia were cancelled for 2 days, but after 4 hours at the bus station, I got on one to Zagreb.

Katrin is currently (still) in Iceland, enjoying the most time off she has ever had for traveling domestically in a glorious Icelandic summer! Without work as a tour guide, she has had the chance to chase other dreams, like an art exhibit, redecorating at home and building a business. Stay tuned…