There are direct flights from New Zealand, Australia, and Fiji to Tonga, which made me think it might be busier or more touristy than the other islands. Coming from Samoa, which has direct flights to the same places plus the US, it seemed like a tiny village, but still busier than many other islands. Tongatapu, the main island, was totally flat, so flat that the only incline I ever walked on was the stairs up to my room and down to the beach at low tide. Without any mountains, there was less rain, and I always felt like I was just around the corner from the sea.

I thought Samoans were really religious, but Tonga takes religion to another level. The Mormons had multiple churches in some villages, and apparently their mission is to make Tonga the first entirely Mormon country in the world. They wear neatly pressed white dress shirts, a tie, and a skirt, sometimes made of the traditional woven bark other Tongans like to wear. The missionaries learn to speak perfect Tongan, in order to improve their door-to-door conversions, but then teach Tongans that English is the only language they should speak, since without it, you can’t be saved (?!?!). 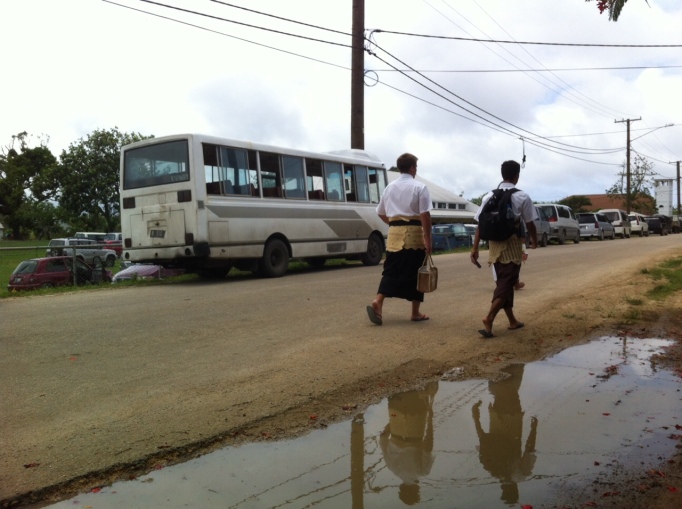 Mormon’s going to work in their bark skirts

Tonga is a kingdom, and the royal family lives in a bright red and white wooden ‘palace’ that looks more like an old-style British plantation house. The king doesn’t always live there, nor his family, but the last king lived in another mansion facing his mother’s estate who had access to 2 cannons facing his house (so she could blow him up if he misbehaved). The royal family encourages everyone to do nothing on Sunday except go to church, so taxis, shops, restaurants and even the airport are completely deserted. There are flights every day except Sunday, so this conservative schedule is actually imposed on the international airlines who can’t do anything about it – no one can work at the airport on Sunday. 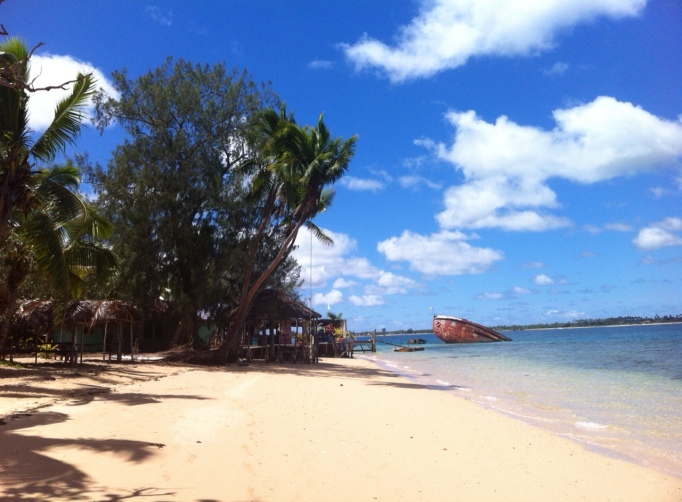 The only place that may have some life are the tourist resorts, most of which are set up on their own private islet. On Sunday, I went to Pangiamotu, only 15 mins away by boat, and so did 100 other people. It was a mix of westerners, Japanese tourists, and majority Tongans, all enjoying an escape from obligatory church attendance and/or the ghost town that had become Nuku’Alofa, Tongatapu’s capital. 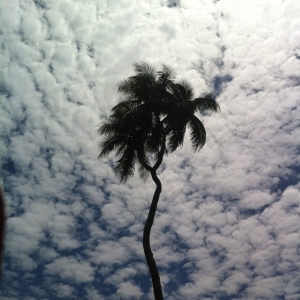 My entire visit to Tonga was facilitated by a British guy named Toni. I took Toni’s Tours airport shuttle, stayed at Toni’s guesthouse, and took Toni’s tour to the blowholes. He took me proudly to the world’s only 3-headed coconut tree, but I later found out Tuvalu has a few too. He’s lived there for more than 20 years, has a Tongan wife and owns a few houses, and he’s basically the go-to guy for any backpacker in town. The tourists are few, despite all the airplane traffic, since most people coming and going are Tongans and their relatives. Still, he runs his business, at prices no one else could match, and struggles to feed all the mouths that have latched on to him for financial support. It must be a lonely world for him there, but he says he doesn’t miss England one bit, and as long as the cashflow covers the bills, he’s not going anywhere or unadopting any kids. So If you ever make to Tonga, Toni’s your man, and you should help support his retirement in paradise.

Katrin is currently in Iceland, working on her PhD on landscape therapy. She has also founded a company called Me Time, a yoga and mindfulness retreat held in the Icelandic countryside over the winter months.