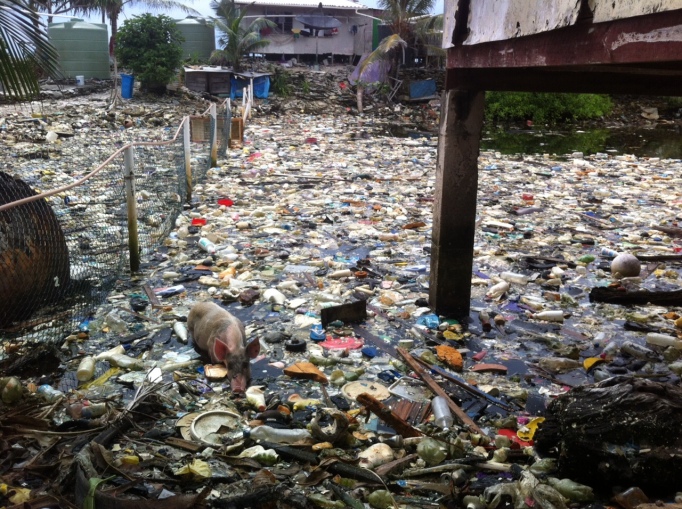 not the most beatiful picture of Tuvalu, but certainly a memorable one… the island is slowly sinking under the sea and debris

I had never heard of Tuvalu before, and apparently Im not the only one. I was also the only idiot on the whole plane who didn’t know Tuvalu is off the banking grid, as in no atm’s, credit cards or debit cards (in my defense, I googled if there was a bank and there were 2… they just dont have atm’s), so I had to survive off $200AUD for nearly a week. Tuvalu only has a population of about 10,000, living on 25 square kilometres spread out over 9 islands in the middle of the Pacific, so it’s not surprising few people have heard of it and a cash economy does just fine. But, it is an actual, UN recognized, functional country, with a Taiwanese embassy and one little airstrip that takes up half of the main island. Fongafale is more than 10 km long, but only 10-400m wide and the airstrip lies smack dab in the middle of the widest part. It’s a couple km of un-fenced concrete, only a metre above sea-level at high tide, and a little cottage near the middle of it marks the airport terminal. It’s the international airport, with two flights a week to Fiji, and the duty free shop doesn’t fit inside so instead it’s a portable trailer driven up for the occasion. All the passengers don’t even fit inside to line up for customs, but they’re kind enough to provide umbrellas for those stuck outside.

The narrowest part of Fongafale

It rained cats and dogs while I was there. Puddles turned into small lakes and the whole length of the runway was under water at one point. I was there during a full moon and the king tides brought the ocean right over the roads. Rising sea-levels have slowly been chewing the island away, pushing the coast line further and further inland. Coconut trees that used to be on the beach have now been washed away and drowned, and the seashore is more often a man-made wall made of rock piles or decaying cars.

I was in Tuvalu for 5 days, and knew that would be enough time to see it all, make some friends, read a book, and relax a lot. After 2 days, I had done all that, and then watched the entire Godfather movie series. The weather had been mostly rain, and most people stayed at home or went to church. Even school got cancelled because of the rain, and a concert I wanted to see, so I wondered what I’d do with the rest of my time. It didn’t take long until I was nearly too busy to sleep, because that cancelled concert night I ended up at another live music event where an Argentinian film crew befriended me. I spent the next few days tagging along with them, filming scenes of the island, interviews with locals, boat trips to secluded islands, live-dancing and singing, and the hustle and bustle of the bi-weekly plane days.

man-made barriers against the king tides

I didn’t realize how likely flights are to change or be cancelled. The morning I was supposed to check in for my flight, it had been raining buckets for hours straight, and the plane was delayed and only barely managed to land and take off on the flooded runway. But thank god the plane did come, since it’s one of the most well-attended events in the community. The ladies selling farewell necklaces set up shop, the kids line up to watch the plane soar over the runway, the passengers getting ready to go just wait around on the side of the runway, and every other Tom Dick and Harry knows someone already there or arriving on the flight that it seems all of Fongafale shows up to greet the plane.