I’ve been flying between the gulf countries, but the flights all last less than an hour, and we’re preparing for landing even before we’ve finished taking off. Its also cheap and easy, but it does take an extra hour or two on each side to get in and out of airport, get the visa, and clear customs. They search you on arrival, mostly for pork and alcohol, but people are very trusting and relaxed so I’ve never actually noticed an officer search or question anyone, and they’re barely watching the x-ray images to find a reason to. I would prefer to travel by bus, cutting in and out of Saudi Arabia, but getting a visa there has been a major issue, and will most likely end in failure (my third attempt was just rejected).

Bahrain is like Saudi’s Vegas of the peninsula, or their Amsterdam of the gulf. It’s where they go to play, indulge in all the ‘haram’ or forbidden indulgences of alcohol and seeing uncovered, single women in public places. Pork was even legal in Bahrain, but I imagine that’s a bigger luxury item for all the expats in Bahrain. Local Bahrainis make up less than half the population of the island, and an American Navy base brings a lot of Americans and American culture to the tiny place.

all the kings camels at the Royal Camel farm

I was couchsurfing with an American couple, and I got to visit the base. Passing their security check was like traveling all the way to the US, a mini-world of American architecture, restaurants, a US postal service, and even dollars as their official currency. Theoretically you could stay there and feel like you were still in the states, having no contact with Bahrain, which I guess is kind of their goal. But the American influence spills outside their walls, with American cars, pubs and restaurants covering all of Bahrain.

Bahrain is one of the longest inhabited and historically rich areas of the gulf, formerly known as Tylos and before that, Dilmun. Oil was first discovered in 1932 (Bahrain had the first oil well dug in the gulf then), and until then they had lived off palm cultivation and pearls. Bahraini pearls are still a valuable resource (and brilliant tourist temptation), but oil has clearly taken over, as everywhere else in the gulf. Even though its a small island, a causeway connects Bahrain to Saudi Arabia, and the south and center of Bahrain have very little habitation. Only oil rigs and Badouin camps spot the dusty interior, and the tallest peak is a mere 134m, but every hilltop is a satellite or military area off-limits to the ordinary person. 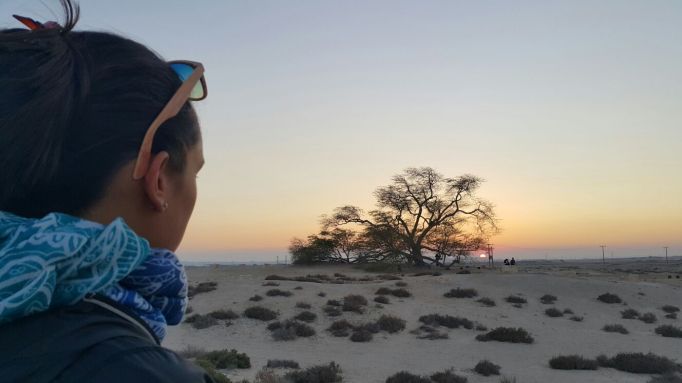 sunset at the tree of life

I also couchsurfed with an Australian couple who owned a sail boat, and spent a day drinking with two Canadian teacher friends who live and work in Saudi, but come over to Bahrain to lift their imposed prohibition every couple weeks. I got my dirty paws on a horse to ride, at sunset near the tree of life. The tree of life is a lone, 400 year old ree sitting in the middle of the island, and perhaps the most eco-touristy thing I’ve done so far. The Camel farm, Grand mosque, Bahrain Fort, and Bahrain National museum were pleasant touristy activities, but my time was mostly spent sharing meals, of various ethnicities (like Mexican and Korean), and socializing over board games or shisha. I’m getting used to these kinds of norms, but it would be really nice to spend more time outside in this season of perfect weather.