It’s been a disappointing pain not being able to travel overland through Saudi Arabia, but when I finally got to the Emirates, it was possible to go overland to Oman. I visited Dubai a few years ago when an Australian friend of mine worked for Emirates Airline, but had never been to Abu Dhabi, and the flights were cheap enough that I decided to fly to Muscat instead, saving the time of driving thru no-mans-land to enjoying the open nothingness of Oman’s countryside. 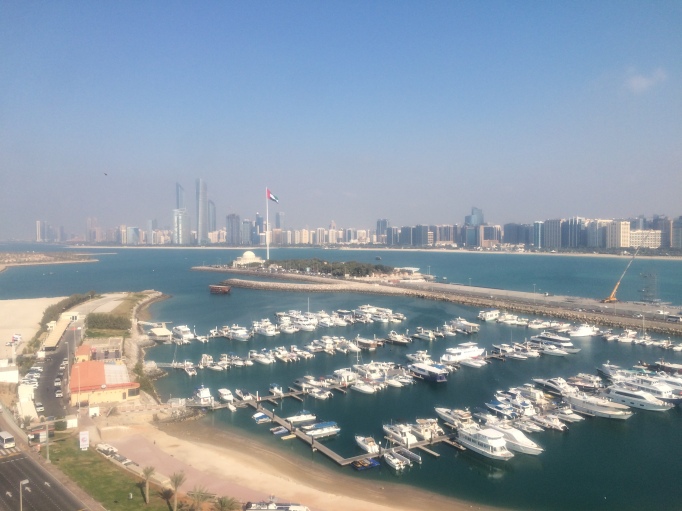 Abu Dhabi, the real capital of the UAE, was similar to Dubai, full of those tall and shiny buildings towering over the old and dusty classic buildings. The new and artificial feeling of a mega-city has stamped out the old and traditional, but tiny mosques still sit humbly between glass and concrete, even between highways and parking lots.

I couchsurfed with an American English teacher named Jackie, on the up-and-coming Al Reem Island, a man-made development project of highrises only 30% completed. Her 30 or 40 storey building had a pool that no one visited, but I thought the water was quite perfect. There are also public buses that no one I met had used, but eventually it only took one bus card and a little googling to figure out the system and avoid using taxi’s for everywhere.

My to-do list for 4 days wasn’t huge, but the places were. The World Trade Center was a commercial building, a residential building, a mall, and a souk, and the Grand Mosque can fit 40,000 worshippers under their multi-ton chandeliers and single carpet weighing some forty tons.

At Marina Island there was another mall, and a ferris wheel and some dhow boat cruises. At Yas Island there was an even bigger mall, a water park, and Ferrari world, with the fastest roller coaster in the world. There were desert safari tours and sand dune buggy tours, camel rides and horse back tours, and shisha and tea to lure in any stop-over tourist, but none of the local expats (which are more than 50% of the population) seem to have explored too far.

Some would say I didn’t either, but I felt very far and away from the glitz and glamour of Abu Dhabi when I visited a bachelor Pakistani work village, a sort of high-rise slum, where the 26 storey building 5 blocks from the WTC had 8 apartments on each floor, each with 1 bathroom, 1 kitchen, and 7 rooms of 3 triple bunk beds. This meant that 9 men lived in the space of about 9 square meters, them and all their stuff, and had to share one squat toilet which was also the shower, and cook meals communally and share them on the 2 square meter floor space each evening. I was invited to stay there, sharing the space of one bunk bed (not even a bed but a sheet of wood) with the only white guy in the entire community of 1,680 men, a Canadian couchsurfer, and would have stayed expect for the fact that I was the only woman in the entire building and had lied by saying I was his sister just to enter. The cultural and/or religious insult of sleeping in the same room of a bunch of men, married or not, made me feel just a little more uncomfortable than the dog-sized rats crawling around, so I returned back to Jackie’s and slept alone on her couch.