My favourite time to be in Vancouver is springtime. I was a little early for the cherry blossoms, but the first warm weekend and sunny skies did have a few trees blossoming early. It was my first trip to BC that I truly felt like a tourist – renting a car and booking hotels is something I´ve never done before.

Fewer and fewer people from my UBC days are left, and the city has transformed so much since the Olympics that I barely recognised parts of downtown. Robson street and Granville look like old-fashioned relics of the good old days, Gastown looks the same but feels completely different, and I don´t even remember what the new Olympic Village neighbourhood looked like before it was there.

Going to BC means the routine family check up. My grandma would be furious is I was around and didn´t visit. But visiting her always means a cloud of guilt, for not visiting earlier or more often, not staying long enough, and not eating enough. This time, I got in the most trouble for not calling ahead since she didn´t get a chance to cook up a storm and overfeed me the best Guyanese chicken curry you´ve ever had, but it wasn´t meal time and we had places to go.

I was with Master Chef Thrainn, on his first visit to BC, and I wanted to impress him with the wining and dining scene. It wasn´t all fancy – Tim Hortons and A&W are Canadian musts, and wine tasting in Langley and visiting a BC liquor store to see the Okanagan selection were part of our master plan. I saw my oldest friend from Canada, Lisa, who took us around the vineyards, and visited her younger brother, sous chef at Coquilles, in Gastown. We had to go to Cactus Club and Earls, the two Canadian chains I owe all my server training to, and the trip highlight was hands down Araxi in Whistler; the shucked right in front of you oysters, fresh sea food and local wine list impressed even Thrainn, who doesn´t normally like oysters.

The Peak2Peak Gondola, taking us from Blackcomb to Whistler mountain

We spent four days in Whistler, with fresh snow on our first day and a couple days of powder, but most importantly, we had three days of sunshine on the slopes with a hottub to soothe our muscles every night. I had a friend in Whistler and a few in Vancouver to visit, and we tried some local brews at the Craft Beer Market.

feeding the birds on 7th Heaven

We started our trip with the first night at Cultus, and woke up to a glorious morning on the lake. We ended our trip with an upgrade at the Shangri-la hotel, in Vancouver´s tallest building, but looking across at Trump tower made us prefer the view from our other hotel balcony peering down Thurlow street to the Olympic torch. Stanley Park was still as I remember, but the one morning of dismal rain we had on our trip ruined our plans to bike around it. At least I have that and a few more cherry blossoms to come back to, so its not goodbye yet…

There’s no place like home, especially for the holidays, and even more so when you’ve got two places to call home. It sure was festive to be in the Holy land in the days leading up to Christmas, but arriving in Reykjavik on December 23rd to a white winter wonderland and -10°c couldn´t have felt better. The days were super short but the nights were lit up with Christmas lights, northern lights and starry skies. I stuffed my belly with traditional Icelandic Christmas food – my favourites being delicious smoked and boiled lamb leg and home-baked flat bread (´laufabrauð´ or leaf bread – try it!). Some other delicacies I avoided, like rotten sting ray (stay away from ´skata´), but of course i stuffed my face with Icelandic hot dogs, appelsin og malt (a mix of non-alcoholic malt and orange soda) and regular flatbread that´s best for breakfast with sliced lamb.

the brightest part of the day in Dad´s valley

I flew to Seattle on Boxing day, where me and my best friend Mike celebrated by finishing half a dozen bottles of assorted whiskies in 2 nights. Then it was up to Vancouver to have a sister day and celebrating my older sister not getting married on December 29th (yes, it was a momentous occasion, the guy is a creep and doesn´t deserve even the small toe of Kristjana´s left foot). Grandma and mom have turned into very similar grumpy old women, but I guess it happens to most mothers when their kids don´t stick around to keep them young and cool or in the loop. 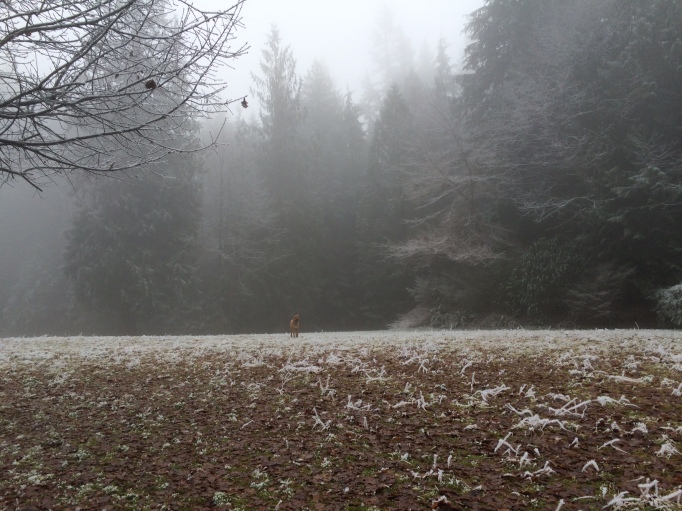 a friends dog at his cabin

But anyway, this isn´t a food blog and my mouths watering, but I´ll emphasize again how refreshing, clean, crisp and amazing it was to have a really cold, wintery christmas, making the inside of any home or shop (and outdoor hottubs and public swimming pools too) feel ultra cozy and the festive feeling of evening last almost the whole day. I celebrated with Dad and his neighbour, where we mostly just exchanged chocolates as gifts, but I was thrilled to find some Christmas cards addressed to me in the mail box and small gifts from friends come popping up when they made appearances.

New Year´s was a real highlight, a reunion of UBC classmates in even snowier, cozier, whiter Whistler where we house partied like we were still freshmen. We lit firecrackers inside and outside of my friends cabin and drank way too many bad shots of bad tequila and gentleman´s jack, which makes a gentleman out of noone. My hangover lasted 2 days, which is a sign you´re getting old, but 3 days later I´m on a plane to the Caribbean to heal all wounds and work on my tan. A week of temperatures below zero is about all I can handle anyway.